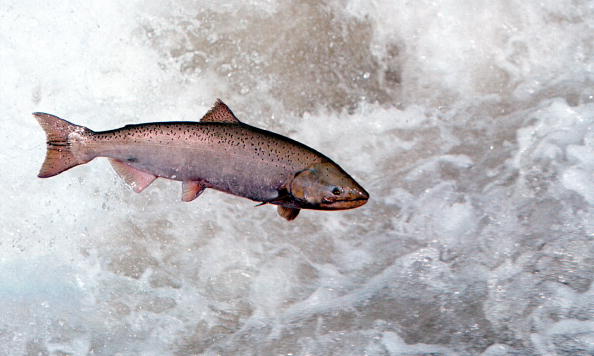 A Chinook Salmon Leaps Through White Water May 17, 2001 In The Rapid River In Idaho As It Attempts To Clear A Migration Barrier Dam.(Photo By Bill Schaefer/Getty Images)
Environment

Last week, Defenders and our allies chalked up another courtroom victory – this time, to protect endangered salmon and steelhead from five deadly pesticides in the Pacific Northwest. Although the five pesticides – carbaryl, chlorpyrifos, diazinon, malathion, and methomyl – were designed to kill insects, they either end up killing the endangered fish, destroying their habitat, inhibiting their reproduction, or killing the insects the fish prey on to survive. Now, the Environmental Protection Agency (EPA) has agreed to put new rules in place to keep these pesticides from being used along streams, where the chemicals can leach into the water and cause so much damage.

The National Marine Fisheries Service (NMFS) raised concerns about these pesticides in 2008 and 2009, when their research found that by allowing these substances to be used near streams, the EPA was putting endangered species in further danger of extinction – in direct violation of the Endangered Species Act. NMFS determined that the pesticides would not only put nearly 30 species of salmon and steelhead at risk, but it would also damage the very streams they rely on for survival. NMFS did their part by planting buffer zones along the streams to minimize the damage, but that step alone would not be enough to keep the streams and their inhabitants safe.  NMFS ordered the EPA to protect the fish and the streams by prohibiting any aerial spray of the pesticides within 600-1,000 feet of salmon waters, and any ground application of the pesticides within 50-600 feet.

Despite NMFS’ order, the EPA refused to implement the recommendation, opting instead for less protective measures. NMFS even wrote to the EPA, explaining that the agency’s inferior protections would end up killing juvenile salmon and their prey. However, the EPA continued to ignore the urgent warnings, allowing pesticides to bypass the inadequate buffers and continue to run into the streams. In November 2010, a year after the mandate from NMFS, the EPA still hadn’t put any new protections in place. It was a stalemate. NMFS had used all its authority to demand the right protections, but they didn’t have the power to force the EPA to obey. So Defenders and our allies stepped in – we filed suit to force EPA to act, and to ensure that pesticides will not jeopardize the survival and recovery of endangered salmon and steelhead. Last week’s long-awaited agreement is the result: a necessary step in protecting the endangered salmon, steelhead, and streams in the Pacific Northwest

Under this new agreement, the EPA will prohibit aerial spraying of the pesticides within 300 feet of salmon waters, and ground application within 60 feet. These “no-spray buffers” will remain in place until the EPA works with NMFS to review and analyze the complete impacts the pesticides can have on the fish and their streams. EPA also agreed to notify pesticide users, state and local governments, and federal agencies about the reinstated buffers, highlighting the applicable streams. This way, farmers will know how and where they can protect salmon and steelhead from pesticides, and can work to develop alternatives.

As Jason Rylander, our senior staff attorney on the case, said “It’s kind of a no-brainer that salmon and pesticides don’t mix. Today’s agreement will go a long way towards ensuring that these highly toxic chemicals stay out of rivers and streams and out of the food chain.” This agreement is not only important for salmon and steelhead, but also serves as a wakeup call to EPA that it cannot ignore orders to protect endangered species.

This article was originally published and writted by Anne Russell Gregory, a contributing writer for www.defendersblog.org. For the original story and more information, please click HERE.