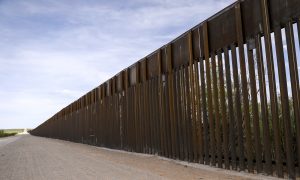 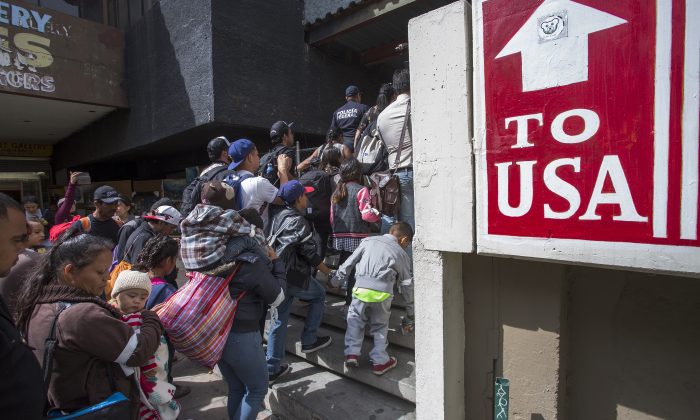 Members of a caravan of Central Americans who spent weeks traveling across Mexico walk from Mexico to the U.S. side of the border to ask authorities for asylum in Tijuana, Baja California Norte, Mexico, on April 29, 2018. (David McNew/Getty Images)
Viewpoints

Evidence increasingly piles up that our most concerning immigration problem isn’t on our southern border; it’s in Congress.

In a recent oration about immigration, Rep. Alexandria Ocasio-Cortez (D-N.Y.) waxed lyrical in what began as a Marxist jingle, rose to something like existential philosophy, and ended in an unabashed defense of open borders. She proclaimed, “Migration to me is, liberation. It’s the ability to move and be. It’s the freedom to be, really. … And I think that all people should be free, to be, here, in our communities.”

Statements such as these are silly and degrade the seriousness proper to the subject. To think about immigration and asylum policies in a prudent way, we must maintain an important distinction. The claims of those with a “credible fear of persecution”—as we define it in our laws—differ categorically from those merely with a desire to enjoy the incredible freedoms and economic opportunities available in the United States.

When members of Congress spout bombastic rhetoric implying that all who simply desire a better life have a right to live in the United States, they conflate these two different claims and undermine the pity that we think genuine asylum-seekers are properly due.

On July 26, Guatemala and the United States signed a “safe third country agreement,” which effectively makes Guatemala a checkpoint in Central America for absorbing migrants who would otherwise try to apply for asylum in the United States. Honduras and El Salvador may soon follow suit. This plan will deter those with illegitimate asylum claims from attempting to enter the United States illegally by abusing our asylum policy.

Further, the agreement allows Guatemalans interested in working temporarily in the United States to apply for work visas from their home country. This arrangement is a win-win, not only for our two countries, but for the rule of law, generally.

This is a prudent policy because it effectively re-establishes the distinction between the claims of the few who genuinely qualify as asylum-seekers and the many who simply want a better life than what they believe is currently available in their home countries. Only by maintaining the legitimacy of this distinction can we think prudently about immigration and asylum policies.

In the Declaration of Independence, the American founders summarized the ends of government as simply “safety and happiness.” Our resolve to make, submit to, and enforce our own laws provides protection of our lives and property—which keeps us safe—and protection of our liberties—which allows us to pursue happiness.

We can enjoy the right of “the pursuit of happiness,” i.e., the good life, only because we are able to secure the needs of mere life through the just enforcement of laws. Sadly, though, many countries struggle to enforce laws that provide safety to secure even mere life, and thus, it’s difficult for people there to attain the aspirations of the good life.

Though sad, this is the historic norm. The United States is a 243-year-old miracle that we take for granted today. We don’t realize how rare and fragile a government is that actually provides for safety and happiness. In part, Donald Trump won the presidency because of a noticeable decline in the resolve of our nation’s leaders to enforce basic laws that protect our safety—rampant illegal immigration being a glaring example.

If we were to let everyone come to this country who simply has a desire to do so, we couldn’t maintain the conditions that allow us to reconcile consent with effective enforcement of laws. Such a modification of the regime would qualify as an abandonment of republican self-government.

A Right to Immigrate?

In a recent interview with National Public Radio, Sarah Pierce, an analyst at the Migration Policy Institute, acknowledged that signing safe third country agreements with other nations will effectively reduce the number of asylum claims made in the United States.

But this reduction would be a distressing problem, she thinks, because it would force people to apply for asylum in countries less safe than the United States, such as Mexico and Guatemala. Pierce thus adopts the same assumption as Ocasio-Cortez above, viz., that all human beings have a right to live in any country they choose.

This logic implies that, because the United States is safer than every country in Central America, migrants in those countries—indeed their entire populations—have a right “to be here in our communities” in the United States. But those who think this way conflate asylum-seekers with those merely interested in improving their current life situation. They would make the rare exception the new rule.

Our laws allow people to seek asylum in our country who can show that their government is so utterly tyrannical that it’s actively trying to persecute them merely “on account of race, religion, nationality, membership in a particular social group, or political opinion.” Fortunately, such odious tyrannies are relatively rare today.

Emphatically, though, we don’t because we can’t provide asylum to all people who live under governments that are simply bad at enforcing decent laws, nor do we offer asylum to people who endure difficult economic conditions in their home country.

Poverty and corrupt or inept governments, however regrettable, aren’t sufficient reasons for establishing a right for someone to live in the United States. People in such circumstances may be worthy of our private charity, but despite the crocodile tears and guilt-tripping of limousine progressives, the U.S. government has no duty to neglect its own citizens and lead the country on a suicide mission to accommodate the poor and less fortunate of the whole world.

Our nation—as John Quincy Adams once eloquently stated—“is the well-wisher to the freedom and independence of all. She is the champion and vindicator only of her own. She will recommend the general cause, by the countenance of her voice, and the benignant sympathy of her example.”