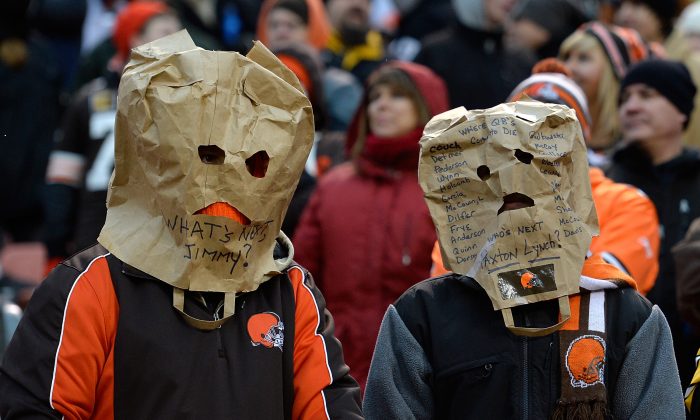 The Cleveland Browns have been to the playoffs just twice since 1989. (Jason Miller/Getty Images)
NFL

‘Sadness’ in Cleveland? Siri Equates it to Browns’ FirstEnergy Stadium

The Cleveland Browns are bad. Football fans know this, the good people of Cleveland know it, and now even Siri—Apple’s personal voice assistant—knows it.

That’s right. In Cleveland, when you ask Siri, “Where is sadness?” it responds with a picture and directions to FirstEnergy Stadium—the Browns home field.

Asking Siri in Cleveland “Where is Sadness,” will show you a map of the Cleveland Browns Stadium. 😂😂😂 pic.twitter.com/aqly3jpqUV

In 2011, comedian Mike Polk called the stadium, “A factory of sadness,” in this hilarious YouTube rant.

Even Siri is making fun of the Cleveland Browns #factoryofsadness https://t.co/Ju0wHSWiWr

The Browns, who last week released once-thought franchise quarterback Johnny Manziel just two years after drafting the former Heisman Trophy winner in the first round, have been to the playoffs just two times since 1989. The once-proud franchise has never won a Super Bowl—they’ve never even won the AFC since the 1967 NFL-AFL merger—and have had four different full-time coaches the past six seasons.

Even more disconcerting they are the only NFL franchise that can say they fired future Hall-of-Fame coach Bill Belichick, who coached the team for five seasons in the 90s before leading New England to four Super Bowl wins and 13 division titles—including the last seven. The Browns last won the division in 1989, when Bernie Kosar was the quarterback.

If you say “sadness” into your iPhone, Siri will direct you to FirstEnergy Stadium, home of the Cleveland Browns. https://t.co/fFNJ3IVazN

But in the years before the merger, the Browns were actually a successful franchise.

Cleveland had arguably the greatest running back of all time in Jim Brown, who led the league in rushing in eight of his nine seasons (1957–65) and won three NFL MVP awards. The eight-time All-Pro retired following the 1965 season at the height of his skills—at age 29—and the franchise has lacked a star who could single-handedly carry the team ever since.