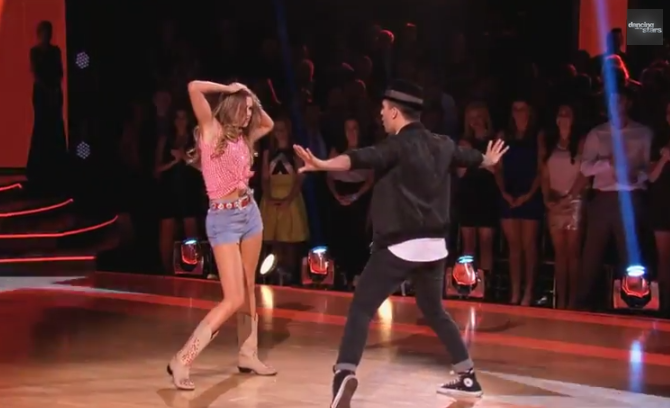 Sadie Robertson’s Treatment on Dancing With the Stars Panned by Glenn Beck: ‘I hate the press’

Sadie Robertson has been one of the most talked about contestants on this season of Dancing With the Stars, and is the subject of some controversy regarding her last dance.

Robertson is one of the famed Duck Dynasty clan, daughter of Willie and Korie Robertson, and also a model.

The 17-year-old and her professional dance partner Mark Ballas did a Jazz dance to a country song on Monday night, earning praise from the judges.

But some of their comments rubbed people the wrong way. The first week’s performance had one of the judge’s telling Robertson that she needed to get “down and dirty,” a comment that Willie later dismissed.

And after the week 2 performance, some of the judges claimed that Sadie did in fact get “down and dirty.”

Carrie Ann, for one, called it “sexy” and “edgy,” adding “would your dad be okay with that performance?

But a number of people spoke out about the analysis, including conservative commentator Glenn Beck.

“Now, I’m watching this, and I don’t think it’s suggestive. It so far looks like dancing. … There’s nothing wrong with that. What is wrong with our media?” he said on his radio program.

Beck said the dancing was “nothing that you wouldn’t see anyplace else, and no one would ever question it.” “But because her family has morals and standards — ” Beck said, gasping sarcastically, “‘Can she actually move her body? Is she allowed? She’s wiggling her hips a little bit! That’s offensive to God and the Lord Jesus, you know.’ What? I hate the press.”

Ballas has also spoken out about keeping things modest for Sadie.

“This show has turned this outfit thing into a stereotype. If you went to a real ballroom competition, of course there are sexy outfits…but every time you see someone on stage in one of those outfits, they chose to wear that. They designed it…that was all their idea,” he told The Hollywood Reporter.

“I like to keep things a little bit more about the dancing. Make it sassy, make it fun, make it cute and sexy at times, but with [Sadie] it’s going to be very appropriate and it’s always going to be comfortable. That’s my bottom-line rule.”