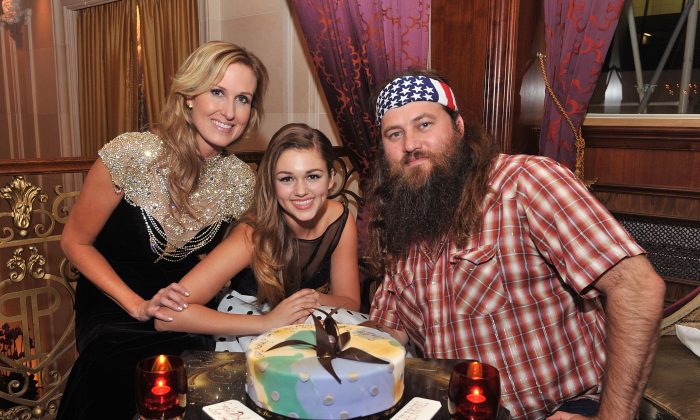 Sadie Robertson, the 17-year-old Duck Dynasty star also appearing on Dancing with the Stars, got the approval from her dad .

Willie Robertson, her father, told ABC: “It is just basic modesty. It’s out of respect that I ask my dad if it’s OK. I’m a Christian, it comes with me everywhere I go.”

He will be approving every style she wears when she takes the stage. “Those aren’t dresses. Those are dish towels,” Robertson said about one of the outfits.

She’s doing her routines with Mark Ballas, a professional dancer. “Of course there are weeks where the dresses are a little shorter,” Ballas said. “But I only do that when the dance requires it. If we need to see nice leg action [or] correct footwork.”

Some fans told ABC that her father is being overbearing. “Sadie has shown maturity and good judgment,” one person said. “He doesn’t need to be over her shoulder and making those faces he does.”

But another added: “Her costumes so far have not been that revealing and it’s refreshing to see that. She is only 17, so give her a break.”

And according to TMZ, the high school where Sadie attends doesn’t allow dancing.

“She also attends Ouachita Christian School in Monroe, LA where administrators have a longstanding ban on all school dances,” the website writes. “We spoke to Sadie’s principal Jamie Stokes, and he was unapologetic about the school’s policy … which he says includes banning all dances. Even proms.”