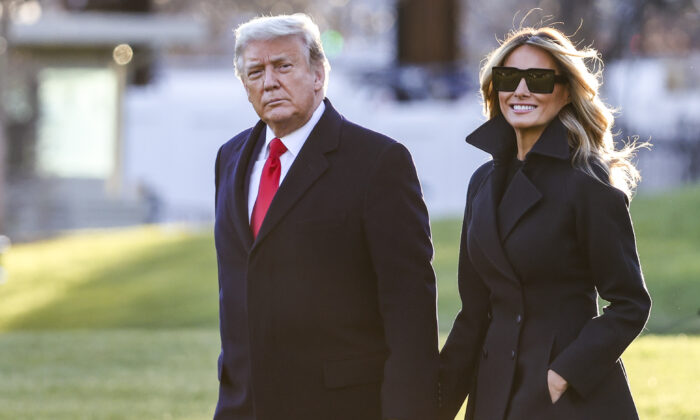 Former First Lady Melania Trump gave her first interview since leaving the White House, providing a hint that her husband may be seeking another term in office and saying “it’s sad to see” the state of the country under the current administration.

“I think we achieved a lot in four years of the Trump administration,” Melania told Fox News in a Sunday interview, adding that “never say never” when asked about whether she could be again living inside the White House.

“I like Washington, D.C. I know it operates completely different than any other city, but I really like it there. And I enjoyed living in the White House. To be first lady of the United States was my greatest honor. I think we achieved a lot in the four years of Trump administration. I enjoyed taking care of the White House. It was my home for a while. I understood it is people’s house. And it was, it was a privilege to live there,” she continued to say.

When asked by Fox host Pete Hegseth about former first ladies Michelle Obama and Hillary Clinton appearing on the cover of Vogue, Melania, a former model, criticized the magazine. Melania appeared on the cover of Vogue in 2005 when she was photographed alongside former President Donald Trump in her wedding dress.

“They’re biased and they have likes and dislikes, and it’s so obvious. And I think American people and everyone sees it. It was their decision, and I have much more important things to do—and I did in the White House—than being on the cover of Vogue,” Melania told the broadcaster.

The former first lady, a native of Slovenia, weighed in on the state of the United States under the Biden administration.

“I think it’s sad to see what’s going on, if you really look deeply into it,” Melania said, adding: “I think a lot of people are struggling and suffering and what is going on around the world as well. So it’s very sad to see and I hope it changes fast,” Melania added.

Donald Trump has not definitively said whether he will run for reelection, although he has suggested in interviews that he might.

Last month, Trump, 75, told the Washington Post that his health could play a role in whether he decides to run or not. In 2024, Trump will turn 78, and should he run—and win—the presidency, he’ll be 82 when he departs. President Joe Biden is slated to turn 80 this November.

“You always have to talk about health. You look like you’re in good health, but tomorrow, you get a letter from a doctor saying come see me again,” he told the outlet in April. ‘That’s not good when they use the word ‘again,’” Trump added, saying he is currently in good health.