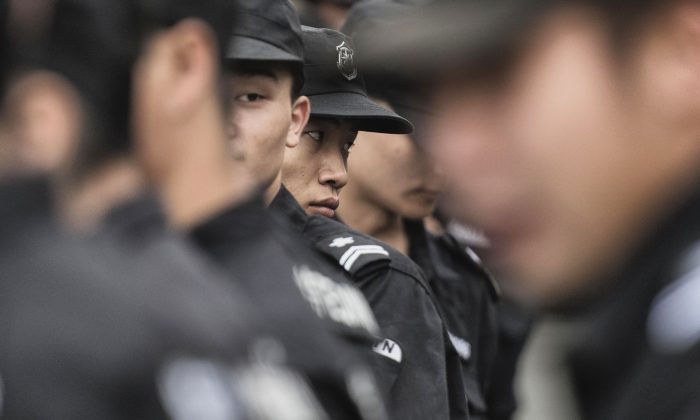 On Aug. 31, the Chinese Communist Party’s official broadcaster, China Central Television, announced that the regime had arrested and punished 197 citizens and blocked 165 online accounts for “spreading rumors” on the Internet.

CCTV’s announcer said that the remarks, which were mainly about the recent deadly explosions in Tianjin, and the ongoing Chinese stock market crash, were “bewitching people, stirring up public sentiment, creating panic, and misleading the masses, resulting in serious interference to the financial market order and social order.”

But an examination by Epoch Times of the comments that were highlighted in the CCTV report indicates that they were hardly calls for revolution in China—instead, many of them were either sorrowful or merely a little salty.

One of the reasons censorship in China is so effective is that it’s very hard to predict what content will be subject to punishment.
— Madeline Earp, Freedom House

The punishing of Chinese citizens for sharing their personal thoughts on Chinese social media comes amid the backdrop of a Chinese stock market that has been plunging since July, and an apocalyptic blaze in the port city of Tianjin that killed at least 158 and injured hundreds of others in August.

The recent crackdown also foreshadows a big military parade on Sept. 3, held to commemorate China’s victory in World War II, but which is widely regarded as a grandiose effort by the Chinese Communist Party to project the nation’s might to the world—and bolster its faltering public image.

“After the Tianjin accident, many made offerings to the dead, but the dead can’t return. Thousands have died, but the media reported only dozens of deaths,” wrote “I Want to Cycle the Heart by Walking” on Chinese microblogging site Sina Weibo.

Sina Weibo user Lgftom wrote of the stock panic: “A little known political force must be behind the stock market crash; would elite, corrupt ‘tigers,’ who have been greatly affected by the anti-corruption campaign, just sit back and wait until they are taken out? … Ordinary citizens have become victims of political infighting.”

The authorities have not published a full list of the individuals who were punished for “spreading rumors.” Nor do they even define exactly what they mean by the term.

“I would speculate that the CCTV report’s intention is to warn people not to discuss these specific topics—in other words that any viewpoints independent of the party line are unwelcome when it comes to potentially inflammatory areas,” wrote Madeline Earp, a researcher at Freedom House, an NGO that advocates for human rights, in an email.

“One of the reasons censorship in China is so effective is that it’s very hard to predict what content will be subject to punishment,” she continued.

A little known political force must be behind the stock market crash.
—  Weibo user

Many of the comments discovered by Epoch Times—by searching for keywords in Sina Weibo posts highlighted during CCTV’s report—did not even convey much in the way of information, instead expressing frustration at the convulsions of the stock market, or anguish at the deaths of firefighters.

Some made claims and speculation about the death toll from the Aug. 12 Tianjin blast—though they were the sort of remarks that would be thought common in the wake of a large-scale catastrophe, when information is scarce.

“Such a large explosion, people at the front line said that there were dead bodies and dead body parts everywhere,” wrote Weibo user Lu Xin Ou Ni. “Chinese news is actually trying to suppress the impact of this incident by refusing to report the actual number of deaths. If you want to know real casualty numbers, you should watch foreign media reports. Chinese news reports are simply nonsense.”

Apart from Internet users, professional reporters were also among those arrested.

During the same crackdown, Caijing journalist Wang Xiaolu was also punished because he allegedly spread false information about the Chinese stock markets in what the authorities characterized as a fabricated report. Wang said he shouldn’t have released his article “at such a sensitive time” in an Aug. 31 confession aired on CCTV.

Arrested for a Hashtag

One of the first people to be punished for “spreading false information” about Tianjin is Shen Liangqin. He was grocery shopping when picked up by local police.

He had forwarded, on social media, an article about the blast by the overseas news website Boxun, with the hashtag “Tianjin Big Explosion.” Shen was released from detention nine days later.

The Chinese regime is well-known for censoring the media and the Chinese Internet after large disasters: the outbreak of SARS in 2003, earthquakes in 2008 and 2011, and a deadly high-speed train crash in 2011.

Shen said to an Epoch Times reporter in an exchange on Twitter that in his view, compared to other abuses in China, “my punishment can be considered relatively light.”

Matthew Robertson contributed to this article.