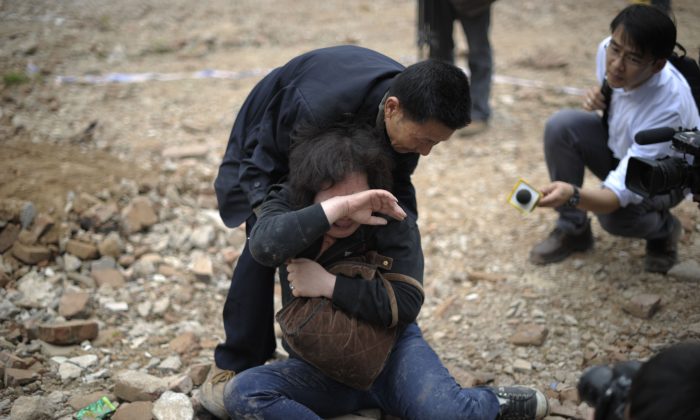 A homeowner who failed to protect her home from demolition in Guangzhou, in south China's Guangdong Province on March 21, 2012. Real estate companies work hand-in-glove with corrupt officials in order to get land cleared for development. (STR/AFP/Getty Images)
China

In China, where politics and business are one and the same, the sackings of high-ranking officials in 2014 also saw many companies implicated—publicly listed companies that encompass nearly every industry in the Chinese economy.

“Most of these implicated companies have witnessed either a fall in business, resignation of top executives, inability to get a loan, and even forced reconstruction after declaring bankruptcy,” stated Chinese media Jinhua Daily on Feb. 10.

If you don’t pay off officials in different departments, the business could be halted anytime.
— Li Hao, pseudonym for a businessman quoted by Beijing News

The woes of these companies are the result of how business is practiced in China.

“Before the anti-corruption campaign, many local officials would buy shares of coal mining companies. And many companies wanted officials to purchase their stocks,” said Lin Boqiang, director of the Collaborative Innovation Center of Energy in Xiamen University, in an interview with Beijing News.

A businessman with the pseudonym Li Hao, while speaking with Beijing News, recalled how different local government departments began setting up their own hurdles as profits in coal mining began to soar and more people began to get into the business in 2004.

“If you don’t pay off officials in different departments, the business could be halted anytime,” said Li. When coal was sold to downstream companies, feasting and bribery were involved, according to Li.

Many purged officials from the coal-rich Shanxi Province, including Ling Jihua, the secretary of the Communist Party’s Central Secretariat, had ties with the coal business as reported previously by the Epoch Times.

Lu’an Group, a state-owned coal company in northern China’s Shanxi Province, was implicated for corruption when its chief executive Ren Runhou, who was also the vice governor of Shanxi, was dismissed from his post in 2014, according to Beijing News.

“Real estate companies in China have a very strong bond with Chinese authorities,” said Gu Yunchang, the director of China Real Estate Associations, while speaking to Beijing news. “All the lands in China are in the hands of the Chinese regime.”

Gu cited as an example, the Hong Kong-based Kaisa Group. It was very friendly with the local authorities in Shenzhen, a major city in Guangdong Province in southern China just across the border from Hong Kong, who cleared out the local residents and seized land for Kaisa to develop.

Jiang Zunyu, the Party secretary of the Political and Legal Affairs Commission in Shenzhen was placed under investigation after Kasia’s president stepped down amid the gloom of bankruptcy.

Zhou Yongkang, the former security czar, had also been previously reported by Epoch Times to have ties to Kaisa.

Chinese authorities have considered banks as a source of money, and a Chinese God of Wealth when they want to give the local GDP a boost, according to Beijing News.

In turn, the Chinese banks are also heavily dependent on the Chinese authorities for getting their hands on some large local projects. Meanwhile, banks themselves are usually in a tussle to win the contract of the local authorities to deposit their savings in their banks, according to Beijing News.

“If a bank has a bad debt, it usually relies on the local authorities to smooth things over,” stated the Beijing News article citing a bank employee.

The wives of Ling and Su Rong, Gansu Province Party Secretary, were part of a “Wives Club” in Minsheng—they got paid without actually working in Minsheng, according to Beijing News.