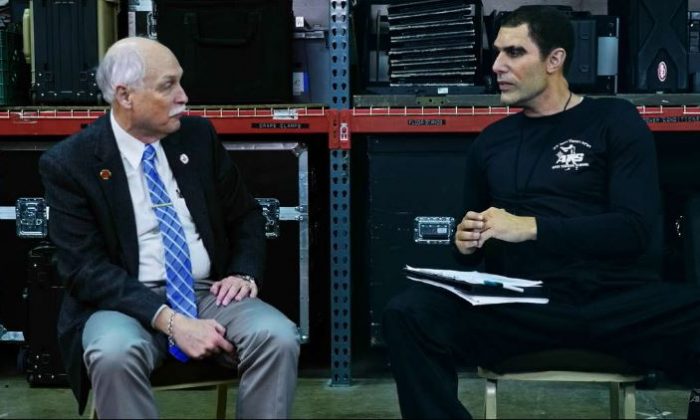 Sacha Baron Cohen’s new television show earned disappointing numbers in its debut, despite the controversy the comedian generated leading up to the airing of the first episode.

Prior to the debut of “Who is America” on Sunday night, it emerged that Cohen had employed a number of disguises and fake cover stories in order to conduct interviews with public officials, including posing as a disabled veteran to get an interview with former vice presidential candidate Sarah Palin.

Cohen and a film crew were, in another case, invited to veteran broadcast journalist Ted Koppel’s house. Cohen posed as a man in a wheelchair who needed an oxygen tank. The show’s fake premise, Koppel said, was that the man would be an ordinary person interviewing Koppel.

When Cohen started pressing Koppel over his views on President Donald Trump, he asked the film crew to leave.

“And to undermine whatever tiny little bit of confidence might be left by pulling a stunt like this … maybe it will make for a good comedy show. I don’t know. But I don’t think it helps the overall atmosphere.”

“He was fake, the producers were fake, the show was fake, and Showtime is fake, to be honest with you,” Norris Sweidan, the owner of a gun store, told Fox LA after Cohen tried and failed to fool him into an interview. “They want a real story, come talk to us. Well give you a real story.”

Despite the controversy over Cohen and his methods, the debut at 10 p.m. on Showtime only drew in 327,000 viewers. Among the key demographic of adults aged 18 to 49, reported Deadline, “Who is America” only pulled in a 0.1 rating.

That placed the show as the 70th highest rated show on cable on July 15.

Showtime said that the show was a success, noting that it debuted online, through streaming services, and On Demand almost a full day before debuting on Showtime.

Showtime said that the show drew in over one million people when all the platforms were added together.

Correction: A previous version of this article misidentified Ted Koppel. He is a broadcast journalist. The Epoch Times regrets the mistake.