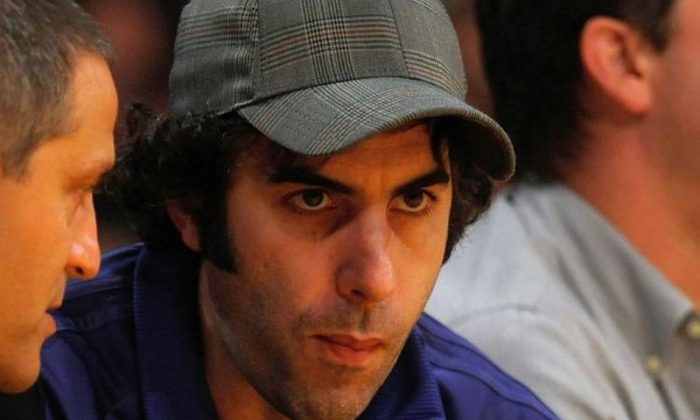 A Riverside, California, gun owner said that a heavily disguised Sacha Baron Cohen came to his business to try and trick him, and it was caught on video.

Norris Sweidan said the incident took place in February 2017 at Warrior One Guns & Ammo, saying that Cohen and a crew claimed to be filming a documentary about a Hungarian immigrant wanting to purchase a gun.

“He comes in, off the bat you can see in the video I’m looking like, this guy does not look like a Hungarian immigrant, tight ass leather pants, a beard, it just didn’t fit,” Sweidan told Fox 11 in Los Angeles. “The moment his words came out of his mouth I was like this guy is full of [expletive].”

“I’m looking at the producer and I’m just like am I being fooled right here?” Sweidan told the station. “And I just kept looking at the guy and I was like you’re Borat, as soon as I said that his eyes just looked at me like, and he did a turn right out the door.” “Borat” is the name of a character in Cohen’s most famous film.

EXCLUSIVE: Riverside gun store owner catches actor #SachaBaronCohen coming to his biz in disguise while pretending to be a Hungarian immigrant wanting a gun. All caught on video!
“He wanted to make gun owners look like idiots. I knew it was BS”
Story at 10pm ONLY on @FOXLA pic.twitter.com/iquWgLd1p9

Cohen left his crew behind in the store, Sweidan said, who added that he believes it is for Cohen’s Showtime show, “Who Is America?”

“We’re talking to the people they don’t wanna give us an answer, we basically told them to get the [expletive], you guys are all full of [expletive], have a great day, get out,” Sweidan said.

He said that Cohen was coming in to make him and gun owners look bad.

“Once I knew it was Borat, we already know his game and his [expletive], so we knew he’s here to make a mockery, and of what? Gun owners? The gun business, gun shops,” Sweidan said.

Cohen and Showtime picked the wrong person, he said.

“He was fake, the producers were fake, the show was fake, and Showtime is fake to be honest with you,” he said. “They want a real story, come talk to us. We’ll give you a real story.”

Cohen’s show “Who Is America?” on Showtime reportedly drew paltry ratings. Only 327,000 watched the show on Sunday night, according to Deadline.com, making it in the “hinterland of the 70th highest-rated original show on cable on July 15.”