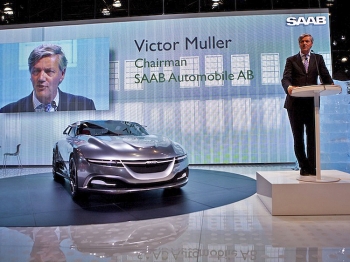 Barbara Gay
View profile
Follow
biggersmaller
Print
In the ongoing saga about the attempts to save the classic Swedish automobile brand Saab, a new Chinese partner has apparently been found, after the deal with manufacturer Hawtai did not work out. This time the partner is China's largest car distributor, Pang Da. The deal was signed on Monday, according to Saab owner and CEO Victor Muller.

The upside of the deal with Pang Da is that the first stage is all about Saab selling its new partner cars, which does not involve any permissions from Swedish, Chinese, or European Union officials. One thousand and three hundred cars worth 30 million euros (US$42.9 million) will solve the acute liquidity crisis in Saab and hopefully also save its many subcontractors in Sweden, that have been struggling financially since Saab stopped paying its bills and eventually shut down production.

The long-term plan is for Pang Da to buy more cars, but also to buy 24 percent of Saab stock. This will require permissions from several different authorities, however. Saab will also continue to look for a manufacturing partner in China, according to a statement to Swedish Television (SVT). Pang Da distributes cars to 1,100 retailers in 23 Chinese provinces.

While Saab official Eric Geers told Swedish Radio (SR) on Thursday that they hope to start up production again, Saab subcontractor Lear announced that they may still have to lay off the entire workforce at its factory in Trollhättan because of the trouble with Saab.