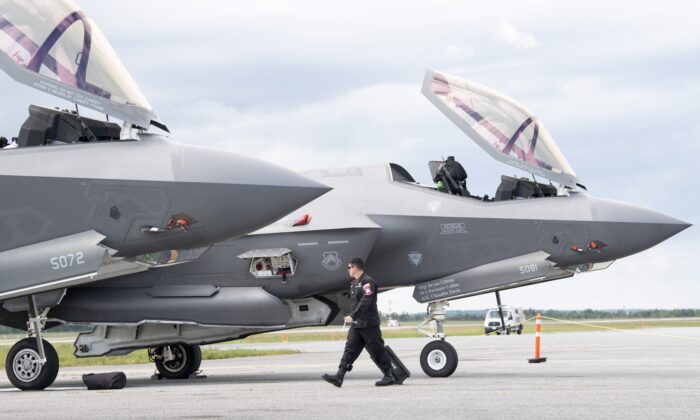 F-35A Lightning II fighter jets, part of a demonstration team for an airshow, at the airport in Ottawa on Sept. 4, 2019. (The Canadian Press/Adrian Wyld)
Canada

The Saab Gripen E and the Lockheed Martin F-35 are in a dogfight to replace the aging CF-18s, as Canada is finally on track to choose its next fighter plane this year.

The Boeing Super Hornet was also in the running, but was officially eliminated in November 2021. Now the bids from Sweden and the United States are left vying for the criteria set forth by Public Services and Procurement Canada, based on capability, cost, and economic benefits.

Alex McColl, a master of public policy grad from the University of Calgary, recommended the Gripen in his 2018 capstone paper. In an interview with The Epoch Times, he called the F-35 an “expensive and complicated maintenance-heavy fighter bomber,” the kind that Canada wisely avoided when it chose the F-18 hornet 40 years ago.

“The Air Force of the time wanted to buy the big, heavy, expensive American Eagle, and [Pierre] Trudeau forced them to buy the least expensive jet that met the bare minimum requirements, which was the much more affordable, smaller, and lighter F-18 Hornet that has served us well over these so many years. So in short, we need to do what we did last time,” said McColl.

“Most of the missions we actually fly are NORAD air-to-air missions and NATO air policing missions in Iceland or the Baltics,” he adds.

“The Gripen is a perfect fit for what we need, and is being offered with the Meteor beyond-visual-range missile, which is the most advanced air-to-air missile in NATO’s inventory.”

He said that among the Gripen’s advantages are “advanced capabilities, advanced technology, the best economic benefit, and the most attractive life-cycle costs.”

“It’s the fastest fighter. It’s got the longest range. It’s designed to be generation-less, providing an ease of upgrades to remain at the forefront of technology,” Palmer said in an interview.

“We’re committed to building it and maintaining it and supporting it in Canada. … We offer a very competitive, low-cost solution, and we’re the only ones offering a committed price as well.”

Palmer said that due to confidentiality requirements, he could not disclose the quoted price in its bid. Sweden has ordered 60 of the Gripen E-series jets—which consist of the single-seater Gripen E, the two-seater Gripen F, and the Gripen Maritime—while Brazil has ordered 36. The latter received its first Gripen in September 2020 under a US$4.6 billion contract for development and production that includes related systems, support, and equipment—at a cost of nearly US$128 million per jet.

By contrast, nine countries are already using F-35 aircraft on their home soil: the United States, United Kingdom, France, Italy, Norway, Israel, Australia, Japan, and South Korea. At least 730 of the planes have already been delivered, with 463,000 flight hours logged in 267,263 sorties. Belgium, Poland, Denmark, Singapore, Finland, and Switzerland have also selected the F-35, while Greece and Czech Republic have expressed interest.

Keith Knotts, Lockheed Martin’s business development manager for Canada and the UK, says Canada would benefit from the strength in those numbers.

“When it comes to being able to operate with key allies and friends, the F-35 will make that seamless,” Knotts said in an interview.

“Canada will also enjoy being part of a global fleet of 3,200-plus aircraft. And with a global sustainment solution that supports all those aircraft, the economies of scale will drive that cost effectiveness.”

The price of F-35s has dropped more than 70 percent since its initial release, with its most recent lot being produced for US$77.9 million per plane. Knotts says that if Canada approves his company’s proposal, 88 jets would be delivered during years of peak production, ensuring a low delivery cost. The cost per unit of flight time has also dropped, with the goal being US$25,000 per flight hour in 2012 dollars.

McColl says inflation and exchange rates will put the flight cost per hour past $41,000 in current Canadian dollars. He also questions whether that goal will be reached. Last May, Goldman Sachs hosted a webcast with Ken Possenriede, executive vice president and CFO of Lockheed Martin, at which although Possenriede reiterated the US$25,000 goal, he also said, “We see sizable growth opportunities in sustainment.”

McColl believes the scenarios listed in Canada’s Future Fighter Capability Project RFP show a bias toward F-35s. One scenario calls for a fighter jet that could dodge Russian air defences to bomb an airport, a tactical approach he doubts Canada or even the United States would ever use.

Canada is among the group of countries involved in developing the F-35, and defence experts have said the jet is the preferred choice of the Royal Canadian Air Force.

“The F-35 brings more to the game than theoretically is necessary,” but this could be invaluable later, says Alan Stephenson, a former CF-18 fighter pilot with more than 35 years in the military.

“Who would have thought that we would be sending F-18s to the Persian Gulf when we purchased them in 1980? I was part of a team that put together the squadron that went down to Persian Gulf War One. We had a fighter that was adaptable to changing times,” Stephenson told The Epoch Times.

Under the Gripen bid, IMP Aerospace & Defence would build the jets in Halifax. Stephenson, who earned a PhD in political science and is now a fellow with the Canadian Global Affairs Institute, says this arrangement has limited economic value.

“I could have lived with the Super Hornet, but I have a real problem if they choose the Gripen, because the only advantage of the Gripen is local politics,” Stephenson said.

“As we’re becoming more networked with the joint all-domain command and control system the Americans are developing, how do you start shoehorning in a product that is not going to be blessed by the American intelligence and security network?”

Canadian companies since 2007 have already been awarded more than US$2 billion (over C$2.54 billion) in contract work as part of the country’s industry partnership in the F-35 program. James Fergusson, deputy director for the Centre of Defence and Security Studies at the University of Manitoba, said that would likely disappear if Canada rejects the F-35.

“Everyone has known, and the experts have all said for over a decade, there is no option but the F-35 for us. Gripen will be a mistake,” Fergusson said in an interview.

Selecting the F-35 could be politically awkward for the government, but Fergusson said the political price will be minimal and the matter will be forgotten.

“In the lead-up to the 2015 election, the policy statement by the Liberal Party, by Trudeau, explicitly stated that they would not buy the F-35. Then that was followed by ‘there would be an open competition to replace the CF-18s.’ Now, it becomes how you spin this at the end of the day.”