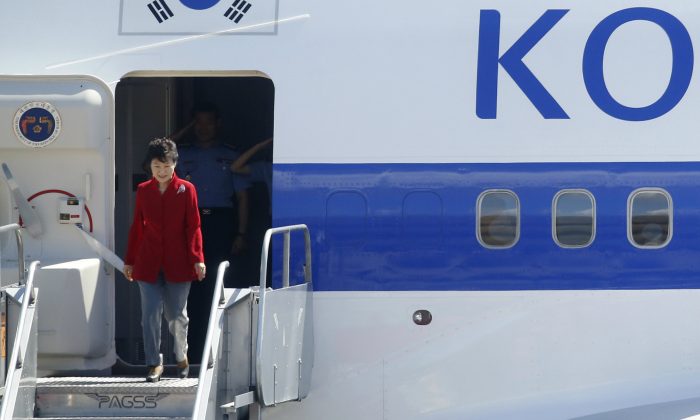 In this file photo, South Korea's President Park Geun-hye disembarks from the presidential plane on her arrival for the Asia-Pacific Economic Cooperation (APEC) summit in Manila, Philippines, on Nov. 17, 2015. (AP Photo/Wally Santana)
International

Even as her prime minister governs in her stead, Park gets to keep living at the presidential Blue House, using her official car and plane, collecting the same monthly salary (about $15,000 reportedly) and receiving round-the-clock security.

She also holds onto the title “President.”

But with nothing officially to do, it’s uncertain how she’ll spend her days during the up-to-six months the country’s Constitutional Court has to decide whether to accept the impeachment and formally end her presidency.

In 2004, when President Roh Moo-hyun was impeached by lawmakers, he spent his time at the Blue House reading books and newspapers and mountain-climbing with journalists, according to South Korean media.

The bureaucratic machinery that suspended Park and transferred her powers to Prime Minister Hwang Kyo-ahn began churning as soon as the impeachment motion passed Friday.

National Assembly Speaker Chung Se-kyun ordered the chairman of the assembly’s legislation and judiciary committee to convey the original version of the motion to the Constitutional Court. Upon receiving the motion, the court will begin its deliberations.

Chung also sent parliamentary officials to deliver copies of the impeachment motion and an official document on the motion’s passage to both the Blue House and the Constitutional Court. Technically, the president’s powers are transferred to the prime minister the moment one of the president’s aides receives the papers.

Hwang will handle the president’s duties until the Constitutional Court rules on Park’s fate. If the court removes her, he would continue to serve that role until a presidential election is held; that vote would have to take place within 60 days of Park’s removal. Through it all, his title will remain prime minister.

Park loses her powers as commander-in-chief of South Korea’s 630,000-member military, and her ability to appoint officials, sign treaties with foreign countries and carry out special pardons of inmates. Park also cannot preside over meetings of presidential secretaries.

With Park allowed to stay at the Blue House, Hwang is to govern the country from his Seoul office.