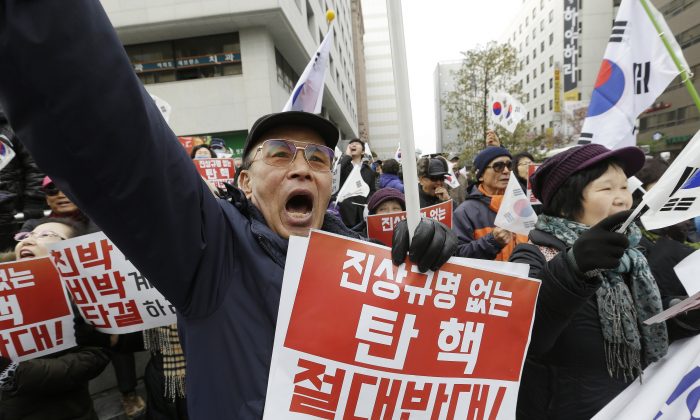 SEOUL, South Korea—South Korea’s opposition-controlled parliament introduced an impeachment motion Thursday against President Park Geun-hye, setting up a likely vote Friday on whether to suspend her powers over a huge political scandal.

A parliamentary official reported the motion to a plenary session, which means an impeachment vote must take place between 24 and 72 hours. Friday is the final day of the current parliamentary regular session.

The motion needs two-thirds approval in the 300-seat single-chamber parliament to pass. The opposition and anti-Park independents have 172 seats and they appear to have secured enough support from ruling party dissenters to pass an impeachment, according to political observers.

If the vote passes, the country’s Constitutional Court will have up to 180 days to determine whether to formally end Park’s presidency. During that time Park would be suspended as president but not removed, with her duties, including commander in chief of South Korea’s 630,000-member military, temporarily transferred to the prime minister until the court reaches a decision on whether her impeachment is constitutional.

Prosecutors say they believe Park colluded in the criminal activities of a longtime confidante to manipulate government affairs and extort businesses. The confidante, Choi Soon-sil, and two of Park’s former aides allegedly linked to the scandal have been indicted. Park, who has immunity from prosecution while in office, has refused to meet with prosecutors investigating the scandal.

Park, South Korea’s first female president, would be the country’s second leader to face an impeachment vote. In 2004, lawmakers impeached then President Roh Moo-hyun on allegations of incompetence and election law violations. But the impeachment led to a big public backlash, and the Constitutional Court reinstated Roh two months later. Roh left office in early 2008 after serving out his single five-year term. In 2009, he killed himself amid a high-profile corruption investigation of his family.

Park has publicly apologized over the scandal three times and acknowledged that she received help from Choi in editing her speeches and with unspecified “public relations” matters. Park denies involvement in Choi’s alleged criminal activities.

Hundreds of thousands of people calling for Park’s ouster rallied near her presidential place of Blue House for six straight Saturdays, and her approval ratings plunged to 4 percent, the lowest among South Korean leaders since democracy came in the late 1980s. An opinion survey released Thursday showed about 78 percent of respondents supported Park’s impeachment.

About 160 lawmakers affiliated with the two main opposition parties said Thursday they would resign en masse if parliament does not approve Park’s impeachment, but that could be just a symbolic move because the parliamentary speaker won’t likely approve them out of worries about further political chaos.

Park is a daughter of late dictator Park Chung-hee, who ruled the country for 18 years until his 1979 assassination. Choi is a daughter of Choi Tae-min, a purported cult leader who served as a mentor for Park Geun-hye until his death in 1994. Park, whose mother was assassinated in 1974, described Choi Soon-sil as someone “who helped me when I had difficulties” in the past.

Park’s ties with Choi Tae-min, who faced a slew of corruption scandals, have long dogged her political career. Many here criticize her for maintaining ties with the Choi family and lacking transparency on key decisions.

Park, whose term is to end in early 2018, has said she would stand down if parliament arranges a stable power transfer. Her liberal opponents have called the overture a stalling tactic to buy time and find ways to survive the scandal.