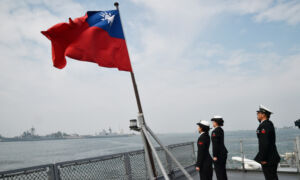 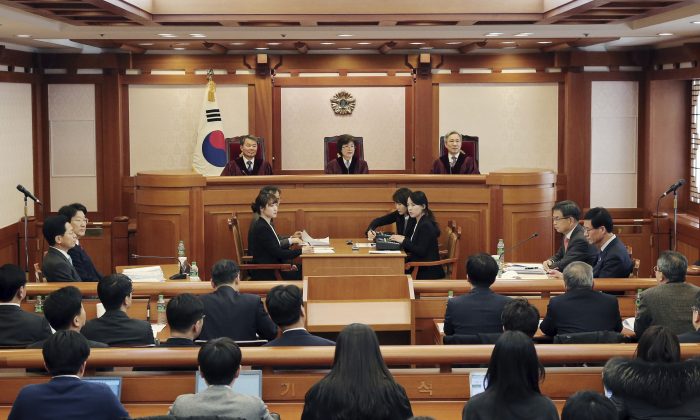 South Korea's Constitutional Court holds a preparatory meeting to review the impeachment of President Park Geun-hye on corruption charges centered on an influence-peddling scandal involving a confidante in Seoul, South Korea on Dec. 30, The court on Friday said it cannot require Park to testify in her impeachment trial that enters the argument phase next week, dismissing demands by lawmakers who voted to remove her over a corruption scandal. (Yonhap via AP)
Asia & Pacific

SEOUL, South Korea—South Korea’s Constitutional Court on Friday said it cannot require President Park Geun-hye to testify in her impeachment trial that enters the argument phase next week, dismissing demands by lawmakers who voted to remove her over a corruption scandal.

The nine-justice court also confirmed the dates when some witnesses will testify but delayed a decision on whether to make companies answer whether they were really forced into sponsoring foundations controlled by the president’s jailed friend, Choi Soon-sil. Lawmakers, who are the prosecutors in an impeachment trial, argued it could pressure companies.

Park’s lawyers, however, said the court needed to verify facts independent of the findings by state prosecutors, who accused Park of allowing Choi to interfere with government affairs and of colluding with Choi to extort money and favors from the country’s largest companies.

The court said there was no way to force Park to appear and the trial can proceed without her.

South Korea’s opposition-controlled parliament voted to impeach Park on Dec. 9 over the corruption scandal, and the court has up to six months to decide whether she should permanently step down or be reinstated.

During the impeachment trial, the court will also review lawmakers’ accusations that Park was responsible for media restrictions and government inaction during a 2014 ferry sinking that killed more than 300 people, mostly teenagers on a school trip.

State prosecutors have passed the investigation to a special prosecution team, which on Friday summoned an arrested former presidential aide for the second time this week as they focus on bribery suspicions between Park and the Samsung Group.

Daughter of Woman in South Korea Scandal Arrested in Denmark

The deal reduced the pension fund’s stake in one of the companies by an estimated hundreds of millions of dollars in value, but allowed Samsung scion Lee Jae-yong to promote a generational transfer of leadership and increase corporate wealth at the group.

Samsung is one of the main companies that gave a combined 77.4 billion won ($64 million) to two non-profits Choi allegedly controlled and abused to expand her personal wealth.

Choi, Ahn and Jung Ho-sung, another arrested presidential aide accused of passing on confidential government information to Choi, will be called to testify Jan. 10.