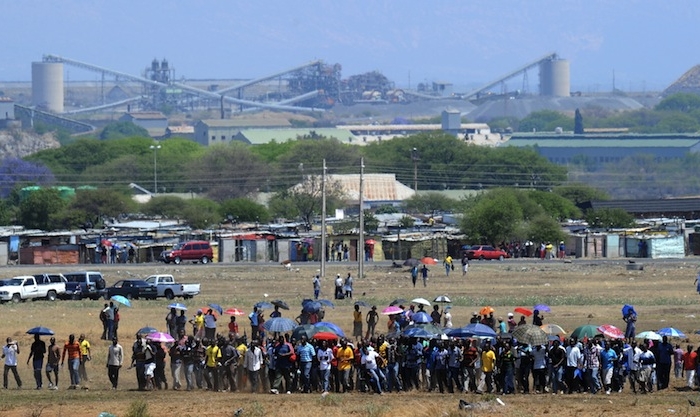 Hundreds of the 12,000 miners sacked by the world's largest platinum producer in South Africa are on their way to a hill where they will mourn a colleague who was killed in clashes with police in Bleskop on Oct. 6. (Alexander Joe/AFP/GettyImages)
Africa

Anglo American Platinum, the world’s largest producer of platinum, fired around 12,000 workers who were on strike at one of its operations in South Africa.

The firm said on Friday the striking workers in Rustenburg were “dismissed” after they did not represent themselves nor did they attend hearings. “Those employees will have three working days to appeal the outcome,” it said.

“Despite the company’s repeated calls for employees to return to work, we have continued to experience attendance levels of less than 20 percent,” the company added.

South Africa’s platinum and gold mining industry has been roiled by strikes, with workers saying they are not getting paid enough.

Tensions boiled over in mid-August when 34 people were shot dead by South African police during a large, somewhat unruly protest at a Lonmin platinum mining facility. Twelve other people were killed in separate incidents during the six-week-long protest

The Lonmin workers have since received a pay raise and have gone back to work after getting a 22-percent pay increase.

Anglo American said the three weeks of strikes have cost the company some 700 million rand ($80 million) in lost revenues due to a downturn in production.

Company CEO Chris Griffith stated that the firm is “exploring the possibility of bringing forward wage negotiations within our current agreements.”