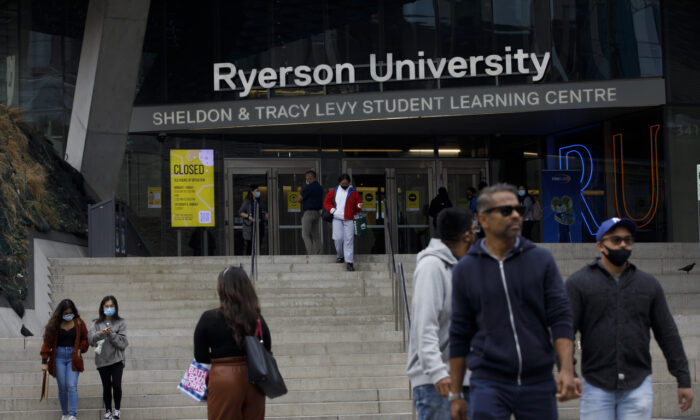 People are seen on the front steps of Ryerson University on campus in Toronto, on Sept. 8, 2020. (Cole Burston/The Canadian Press)
Canada

Ontario’s Ryerson University has been renamed Toronto Metropolitan University after its board of governors approved a proposal for a name change on April 26.

The renaming process began in August 2021, after Ryerson’s board of governors approved recommendations proposed by a special task force created to review the history and legacy of the university’s namesake, Egerton Ryerson, who was criticized for his contribution to the establishment of Canada’s controversial residential school system.

In a news release issued April 26, Ryerson’s president Mohamed Lachemi said he wants to give reassurance that the renaming “is not about erasing our history.”

“As a university, our values have long defined who we are and they will always guide where we are going. Our values are the basis upon which we have built our uniquely vibrant, diverse, and intentionally inclusive culture,” he said.

Instead, Lachemi said the new name was elected to celebrate the location of the university and reflect the wishes of its community members.

“Located in the heart of our country’s biggest and most diverse city—we represent all that it is to be metropolitan,” he said. “We are a gathering place for people from all over the world, from all walks of life, with broad and diverse perspectives, lived experiences and aspirations.”

As it looked for a new name, a renaming advisory committee at the university released a survey in November 2021 to collect ideas from its faculty, staff, students, and alumni. Lachemi made the recommendation to the university’s board of governors based on a shortlist of possibilities the committee selected from the survey completed with roughly 30,000 responses.

While there have been calls for renaming the university throughout the years, the voices increased following a 1,000-strong rally that erupted on the Ryerson campus last June, after the discovery of what was believed to be the remains of over 200 children buried in unmarked graves on the precinct of a former residential school in Kamloops, British Columbia. The protest led to the toppling and beheading of a statue of Ryerson, which Lachemi said won’t be replaced.

In an 1847 report, Ryerson, a Methodist church minister and prominent 19th-century educator, recommended establishing “industrial schools” aimed at educating indigenous children. This led to the founding of two residential schools in Ontario, according to the special task force that was created in November 2020.

After the toppling of the statue, around 345 Ryerson professors and other faculty members signed a letter demanding the name be changed, saying “now is the time to stop commemorating Ryerson.”

However, there are faculty and students who hold opposing views of these changes, though some of them say they were afraid to speak out.

In a previous interview with The Epoch Times, Ryerson professor Patrice Dutil said there will be “serious consequences” to the university’s renaming, which will set a precedence for all other post-secondary education institutions across Canada, and even put historical provincial names at risk.

Jonathan Bradley, who was a journalism student at Ryerson and opposed the toppling of the Ryerson statue, said other students who were in favour of keeping the statue have told him that they were worried about being ostracized if they speak out.

Impacts of the Name Change

In a FAQ webpage, the university said the transition to the Toronto Metropolitan name will happen in phases. While changes to its webpages and social media have already happened, other changes will take more time, such as external signage on campus buildings and amendments to legal documents.

The Ryerson name will continue to appear on official documents such as transcripts and degrees until the university’s governing legislation is amended by the Government of Ontario, a timeline that is out of the university’s control.

Alumni who graduated prior to 2022 can choose to keep the existing award documents for their degrees, diplomas, and certificates with the Ryerson name, or request a reissue bearing the new name after it has been legally changed.