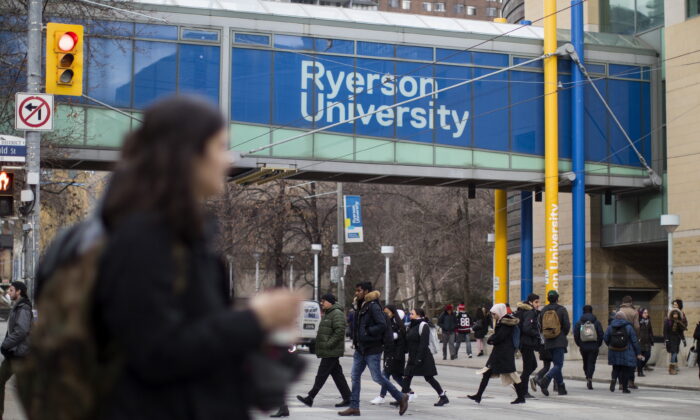 A group of 15 students is taking legal action against Ryerson University for deregistering them from their programs after they chose not to comply with the school’s vaccine mandate.

“This action is brought to remedy the harm caused by the implementation of its COVID-19 vaccine mandate and to advocate for the permanent removal of such policies,” said the group in a statement posted to FundRazr, a crowdfunding platform, on April 1.

According to the group, to date up to 3,600 students have been de-enrolled from their programs, in addition to loss of student employment, scholarships, funding, and peace of mind.

Ryerson’s vaccine policy came into effect on Sept. 7, 2021, upon receiving instructions from Ontario’s chief medical officer of health Dr. Kieran Moore the previous month to implement it according to provincial guidelines no later than that date.

The instructions by Moore offered three options for universities to administer the mandate: accepting proof of full vaccination against COVID-19, proof of medical exemptions, and offering educational sessions about the virus. The students who filed the lawsuit argued that Ryerson did not offer the third option to them at any point in time.

“Under ‘Required Precautions and Procedures,’ section 1 c) grants Ontario Universities the option of allowing students to receive an educational session about COVID-19 vaccines instead of pursuing vaccination or an approved exemption. Ryerson University did not present this option to students. There is not a single instance in these instructions which recommended that students be de-enrolled for non-compliance,” the group said.

“Considering all aforementioned points, it appears that Ryerson University has adopted a heavy-handed approach in regards to the implementation of their COVID-19 vaccination policy.”

The situation took a turn when the university announced on Sept. 2, 2021, that come Oct. 18, 2021, the school would no longer accept “rapid antigen test results to access campus or in-person university activities off campus.”

By November 2021, students who did not attest to their vaccination status were denied their winter timetables and were restricted from adding courses.

“By Wednesday, December 15, all undergraduate, graduate, and law students who remain non-compliant (either through not attesting to their status, or remaining not fully vaccinated), will be removed from any in-person winter courses, and may lose access to key Ryerson systems, such as RAMSS,” the university said on its website.

The Epoch Times reached out to Ryerson for comment but did not hear back by the time of publication.

The 15 students’ fundraising page also includes a video with some of the students explaining their refusal to be vaccinated and why they decided to take the legal route.

Ryan O’Connor, a Toronto-based litigator who represents the students, said the group is seeking damages and a permanent end to the mandate.

“These students are women and men, undergrads and grad students, studying in fields as diverse as Economics to Engineering; from Management to Medical Physics,” O’Connor said in a series of tweets on April 6.

“Their reasons for being unable to comply with the mandate are diverse and not to stereotype. Some have faith-based reasons. Others have medical or age-related concerns. Still others believed that their university shouldn’t have access to their confidential health status.”

The lawyer went on to say many of these students had sought exemptions on religious or medical grounds.

“All of these students had their exemption requests denied,” he said. As a result, the students—and potentially thousands of others at Ryerson—were deregistered from winter term courses.

“The university had no legal obligation to deregister these students,” O’Connor said.

On March 28, Ryerson announced that it would be suspending its vaccine and mask mandates come May 1.

O’Connor said while the university has made the announcement, it did not say the mandates will be gone for good.

“[Ryerson] has not rescinded the mandate and it reserves the right to reimpose it in future academic terms if it believes this is necessary,” he said.

The lawyer said given the reluctance of Ryerson to revoke the mandates permanently, the students will seek an injunction to prevent the university from enforcing the mandate while the lawsuit proceeds through the court process over the coming weeks.

“The students hope that the lawsuit and the injunction will set a precedent for not only Ryerson students but all other university and college students in Ontario, Canada, who have been negatively impacted by COVID-19 vaccine mandates,” the group said.

On March 29, the University of Toronto announced the revoking of its vaccine mandate and other related policies after a human rights complaint was filed against the school.