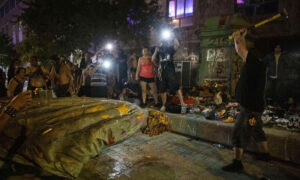 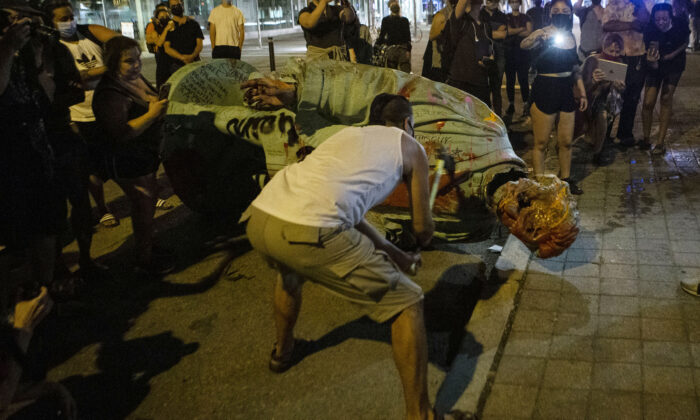 A protester swings a hammer in an attempt to remove the head of the Egerton Ryerson statue after it was toppled at Ryerson University in Toronto on June 6, 2021. (The Canadian Press/Chris Young)
Canada

Ryerson Students Afraid to Speak Out Over Toppling of Statue, Fellow Student Says

Students at Ryerson University who are opposed to the recent toppling of a statue of the school’s namesake are afraid to speak out for fear of being shunned by peers or being targeted online, says a student at the school.

Jonathan Bradley, a fourth-year journalism student at Ryerson, says other students have told him they’re in favour of keeping the statue but worry they’ll be ostracized if they speak out.

“Students who do speak out or who hold an opinion that is ‘unwoke,’ as I like to call it, they’re often ostracized by their peers. They’re mobbed online, harassed on campus,” he told The Epoch Times.

“I know a few students who have been doxxed for sharing an opinion that is considered unwoke. You’ll be excluded, and the mob will do anything they can to try to get you to leave the university.”

A statue of Egerton Ryerson, a prominent 19th-century educator who was instrumental in the design of the residential school system, was toppled and beheaded on the grounds of the university on June 6. The incident occurred following the reported discovery last month of what are believed to be the remains of 215 indigenous children at the location of a former residential school in Kamloops, B.C.

Ryerson University president Mohamed Lachemi has announced that the statue will not be restored or replaced. Last fall, the university established a task force to examine Egerton Ryerson’s history, including “his relationship with Indigenous Peoples, education, residential schools and how that aligns with Ryerson University’s values and mission.”

Bradley says that although Ryerson’s ideas influenced the residential school system, the system itself did not come into being until after his death.

He believes the establishment of the residential schools shouldn’t negate Ryerson’s many extraordinary contributions to Canada, including his service as a minister of the Methodist Church and his work to establish a public education system as the chief superintendent of education for Upper Canada.

In a commentary for the National Post, Bradley criticized the university for having “kowtowed to the mob” responsible for the vandalism, and defended students who hold an opposing opinion.

However, there are solutions, he said, one being the implementation at Ryerson of an effective free speech policy based on the University of Chicago’s statement on freedom of expression, which provides a clear definition of “freedom of speech” that students and the university can be committed to.

In August 2018, the Ontario government mandated all publicly funded universities and colleges in the province to implement a free speech policy by Jan. 1, 2019. The institutions are also required to report annually to the Higher Education Quality Council of Ontario, which monitors compliance, starting in September 2019.

Bradley said this is a good start, but more needs to be done.

“I think it would definitely help if politicians started speaking out whenever these incidents on campus happen, and saying, ‘What’s going on is wrong. Universities need to stand up for free speech,’” he said.