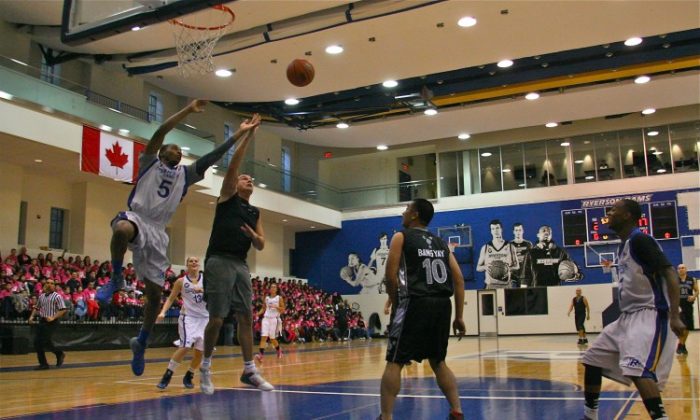 The Ryerson Rams men’s and women’s basketball team plays the Asia Pacific Consultative Committee Police Basketball Team at the annual Team Up Against Bullying event at the Ryerson Mattamy Athletic Centre Nov. 14. The event is a joint collaboration between the Ryerson Rising Rams program and the Toronto Police Service that aims to raise awareness about bullying. (Kristina Skorbach/The Epoch Times)
Canada

Ryerson and Toronto Police Team Up Against Bullying

A crowd of 300 Toronto middle schoolers filled the Ryerson Mattamy Athletic Centre Wednesday to cheer on the basketball game between the Ryerson Rams and the Toronto Police Service (TPS) to mark International Bullying Awareness Week.

Ryerson’s Rising Rams mentorship program, the TPS, and Loblaw Companies Limited have been gathering kids together for the last three years during the week of Nov. 12-18 for the Team Up Against Bullying event, which features motivational speakers and a basketball game.

Superintendent with 51 Division of TPS, John Tanouye, said the event is one of many that create an outlet for schools to engage in during Bullying Awareness Week.

“It brings a lot of the local schools together and promotes inclusiveness, respect, teamwork,” he said.

“I think there’s a heightened awareness of bullying and I think it’s brought to more people’s attention that bullying won’t be accepted,” Tanouye said.

“Not only do you have to report bullying, we also have to step up to bullying and support other people.”

Tanouye said the TPS also hosts anti-bullying seminars at schools throughout the year and the presentations get a lot of positive response from parents and teachers alike.

He said the outreach has had big success in spreading awareness, with increasingly more teens reporting harassment, intimidation, assault, and racism to the police.

“It’s something that if you can address with the youth, it will impact them when they become adults. … That’s what programs like this are all about,” he said.

After the sea of pink-shirted students and staff listened to a personal story of bullying from Jason Colero, the director of education programs and the Argos Foundation with the Toronto Argonauts Football Club, volunteers from the Ryerson Rising Rams served snacks.

Ivan Joseph, director of athletics at Ryerson, said it’s the school’s responsibility as an educational institution to reach out to kids and guide them in a positive direction early on.

Joseph noted that the recent suicide of bullied B.C. teen Amanda Todd highlights the importance of talking about bullying and how to prevent it.

“If one of these [kids] goes home and stops something that happens before it becomes an escalated event, that’s my hope that we’ve been successful,” he said.

Joseph added that although some kids prefer the arts, for the most part athletics gets youngsters interested and engages them.

“The hook gets them in the door, which is athletics, and then the educational component is what we, being good citizens, put on there as well.”

“[Kids] need role models like that,” Tanouye said, referring to the basketball players.