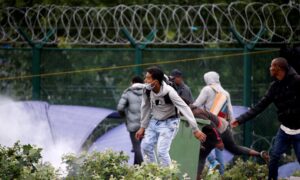 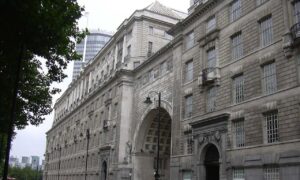 A Ryanair passenger who verbally abused a fellow passenger has apologized for his actions on and denied being a racist.

“Don’t talk to me in a foreign language, you stupid ugly cow,” the man can be heard saying in the video. He also says: “I don’t care whether she’s [expletive] disabled or not; if I tell her to get out, she gets out.”

Video footage of the incident went viral after it was uploaded to social media.

The Ryanair plane was heading from Barcelona to London on Oct. 15.

Mesher, who is from the British city of Birmingham, told Good Morning Britain on Oct. 26 expressed regret for his outburst.

“I’m not a racist person by any means and it was just a fit of bad temper at the time,” he said, according to the Daily Mail. “I apologize for all the distress you’ve had there and since,” Mesher said, addressing Gayle, who was also on the show.

He said he had lost his temper when Gayle appeared not to respond to his request to reach his window seat.

Gayle responded to Mesher’s apology by saying, “You must forget and forgive but it’s going to take a long time,” she said. “I was so depressed all I’ve been doing just crying. I can’t sleep.”

Carol Gayle, the woman’s daughter, complained about what she said was the airline’s lack of intervention during Mesher’s tirade.

She accused Ryanair of downplaying the incident and said that she and her mother were pursuing legal action against the airline.

According to earlier reports, Mesher was allowed to stay in his seat, and Gayle was moved elsewhere.

In a statement, Ryanair responded to the BBC, “We operate strict guidelines for disruptive passengers and we will not tolerate unruly behavior like this.”

“We will be taking this matter further and disruptive or abusive behavior like this will result in passengers being banned from travel,” the airliner added.

Ryanair told the Daily Mail that the company has issued a written apology to Gayle.

Robin Kiely, Ryanair’s head of communications, told the Daily Mail: “We again extend our very sincere apologies to this passenger for the regrettable, and unacceptable remarks that were made to her by an adjacent passenger, and we believe that by reporting this matter immediately to the Essex Police and by apologizing in writing to this customer early on Sunday morning, Ryanair treated it with the urgency and seriousness it warranted.”

Essex Police also told the BBC on Oct. 21: “This incident, which we were made aware of this morning, is believed to have taken place on a plane at Barcelona Airport. Essex Police takes prejudice-based crime seriously and we want all incidents to be reported. We are working closely with Ryanair and the Spanish authorities on the investigation.”