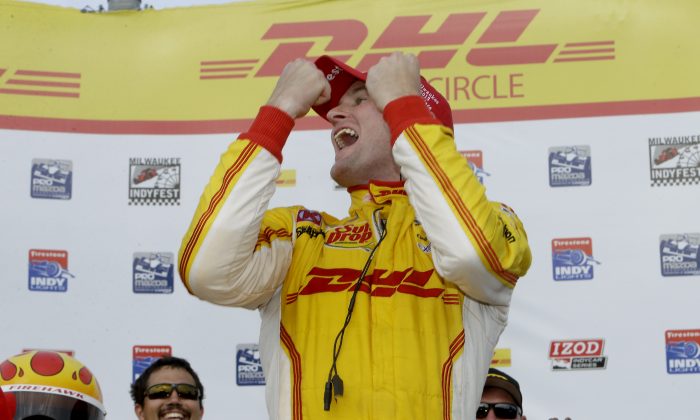 For the third time in his career, Ryan Hunter-Reay has won at the oldest active racetrack in the nation, The Milwaukee Mile.

The track opened in 1903, but RHR didn’t start racing there until 2003. He won in 2004 and he won again in 2012. Now the defending IndyCar champion is again the defending Milwaukee IndyFest race winner. Hunter-Reay, who won at Barber in April, is only the second driver, along with team mate James Hinchcliffe, to win two races in 2013.

Hunter-Reay won his third Milwaukee IndyFest on Fathers’ Day weekend, and for the first time he himself was a father. His wife Beccy brought six-month-old Ryan Jr. to the podium to share in the celebrations.

“I did it for that little guy,” he said on NBCSN, nodding toward his son. “I couldn’t be happier. Really happy to be back in the winner’s circle at Milwaukee. Tthis place has been so special to me—and having this little guy in victory lane is just magic.”

While the win might have looked easy, Hunter-Reay made sure to pint out how much his crew had to do to create that appearance.

“The team just did awesome all day. We had varying levels of grip the whole race t different levels of balance and we just stuck with it and in the end we knew what we had to do to win what a race it was. It was a lot of fun.”

Varying levels of grip, and the abilities of teams to adjust, have decided two races in a row now. At Milwaukee, it was Hunter-Reay’s Andretti Autosport crew which got it right.

With the win Hunter-Reay moved past his team mate Marco Andretti to take second in championship points, only 13 behind leader Helio Castroneves who has 296.

Best Car on the Last Stint

Racing is always furious at the flat, one-mile oval, and Saturday night’s race was intense from the start, when Andretti, Hunter-Reay, and Penske’s Will Power went three-wide into the first turn. Marco kept his lead, but Hunter-Reay, who started fourth, passed his other team mate James Hinchcliffe and took second from Power.

Andretti had the car to beat until problems on a pit stop, followed by an electrical issue, cost him any chance at a win. Takuma Sato, driving for Foyt Racing, then took the lead, handing it off in the pits to Hunter-Reay on lap 156 of the 250-lap contest.

Sato lost track position pitting under green just before a caution, which left him mid-pack. His crew couldn’t seem to find the right set-up to get him back to the front and he finished seventh.

Hunter-Reay handed off to the fourth AA driver, E.J. Viso, when RHR pitted on lap 165. The defending champ then worked his back to the front, passing Castroneves for second on lap 197 and taking the lead from Sato on lap 198.

The AA driver had the best car by far in the closing stint. The top six cars were on the same tire strategy, but Hunter-Reay managed to find one to two miles per hour more each lap, slowly stretching his lead to 4.8 seconds at the finish line.

Texas winner Helio Castroneves took second, only half-a-second ahead of his Penske team mate Will Power. It was Power’s first podium finish of the season.

IndyCar stays on ovals with the Iowa Corn Indy 250 at 2:30 p.m. ET on Sunday, July 23. Tickets are available online through the Iowa Speedway website.