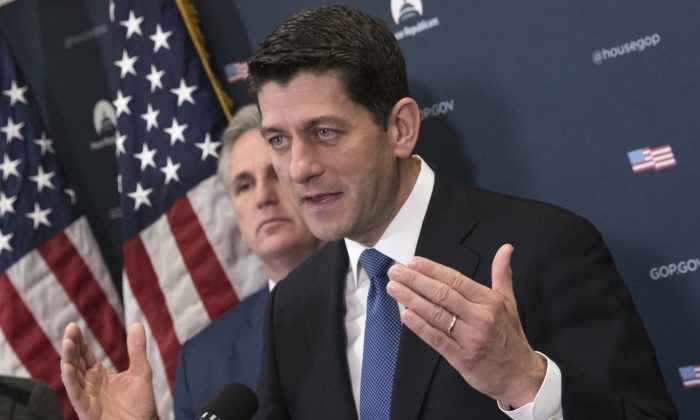 WASHINGTON—Republicans will work on unraveling and replacing the health care law at the same time, House Speaker Paul Ryan said Tuesday as GOP leaders struggled to align their zeal to rapidly erase one of President Barack Obama’s proudest achievements with Congress’ legislative and political pitfalls.

Ryan, R-Wis., spoke to reporters amid growing concern among Republican lawmakers about erasing Obama’s overhaul—which expanded coverage to 20 million people—without having an alternative to show voters. Republicans have been divided for years over how to replace the statute, and the process of crafting replacement legislation they can unify behind is likely to take months or longer.

“It is our goal to bring it all together concurrently,” Ryan said.

“We will pass as much as we can” initially, Ryan said. He said Republicans would then produce a second bill to “show you the full scope of what a real replacement effort looks like.”

President-elect Donald Trump has said he supports erasing Obama’s law and replacing it simultaneously. Congressional leaders had said in recent weeks that they would quickly repeal the statute and with a delayed effective date, and then work on replacing it.

According to Rep. Dennis Ross, R-Fla., Ryan told Republicans Tuesday that “he had a conversation yesterday with Donald Trump, and they’re on the same page.”

GOP leaders have made dismantling Obama’s treasured health care overhaul their premier 2017 priority. But at least six GOP senators and some House members have expressed qualms about repeal without having a substitute.

The Senate and House are expected to approve a GOP-written budget this week that will serve a crucial procedural purpose—blocking Democrats from using a Senate filibuster to derail a future bill dismantling the health care statute. That’s important because filibusters take 60 votes to halt in a chamber that Republicans control by only a 52-48 margin.

Republicans plan to then write legislation erasing much of the health care law and adding some new elements, perhaps including expanded use of health savings accounts.

But Senate rules limit the provisions that can be put into a bill that’s protected against a filibuster. That means Republicans would need a second, subsequent bill to fully rewrite the health care law, and that measure would need at least eight Democratic votes to pass the Senate.

Even if Congress passed repeal rapidly, Republicans say they would phase it in, perhaps over two or three years. Republicans don’t want to be vulnerable to Democrats already accusing them of preparing to tear down the statute without knowing how or if they’ll replace it.

“Turn back before it’s too late,” Senate Minority Leader Chuck Schumer, D-N.Y., said on the Senate floor just short of midnight as Democrats, before leaving for the night, lambasted Republicans with five-and-a-half hours of speeches. “It will damage your party,” Schumer said, “and it will hurt millions of Americans, far more importantly.”

Highlighting GOP indecision, Steve Bannon, who will be White House senior adviser after Trump is sworn in Jan. 20, said, “We’re still thinking that through” when asked by reporters after a Monday meeting in the Capitol if repeal and replace should happen together.

The Affordable Care Act, signed into law in 2010, has required people to obtain coverage. It also created subsidies to help lower-earning people buy policies and expanded Medicaid, but the overhaul has been troubled by rising costs for many consumers and markets that some insurers abandoned.

The burgeoning Republican divisions come as the GOP-led Senate pushed toward a final vote this week on a budget that would prevent Democrats from using a filibuster to block a later repealing Obama’s overhaul.

Republicans voicing a desire to work on repeal and replacement together include Sens. Lamar Alexander and Bob Corker of Tennessee, Susan Collins of Maine, Ron Johnson of Wisconsin and Tom Cotton of Arkansas.

The budget gives congressional committees until Jan. 27 to produce legislation annulling much of the health care law, although consequences for missing that deadline are minor.

Corker, Collins and three other GOP senators introduced a budget amendment delaying that target date until March 3. Corker said that would provide “additional time to get the policy right.”

On CBS’ “Face the Nation” on Sunday, Senate Majority Leader Mitch McConnell, R-Ky., said replacement legislation would follow repeal “rapidly” but did not define the timetable.

Besides health care, senators are focused this week on confirmation hearings for Trump’s Cabinet picks.