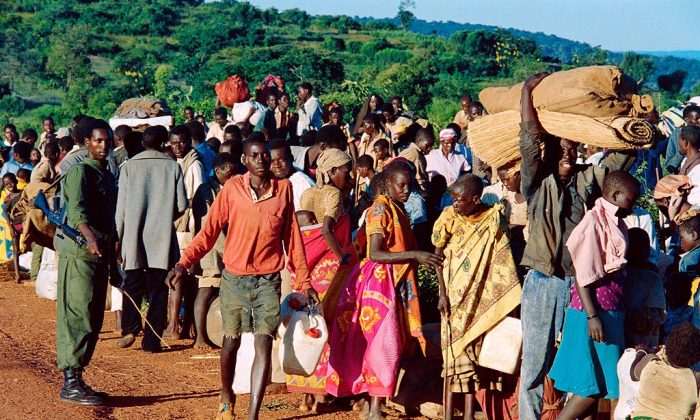 Refugees from Rwanda who have been forced to flee their homes by 12 days of ethnic carbage, are checked on April 19, 1994 at Gasenyi border, about 230kms (144 miles) northwest of Bujumbura, before being sent to a refugee camp. (PASCAL GUYOT/AFP/Getty Images)
US

CEDAR RAPIDS, Iowa—A Rwandan man who lied to gain entry into the U.S. after helping slaughter scores of people during his country’s 1994 genocide must serve 15 years behind bars before facing deportation, a judge ruled Thursday.

Gervais Ngombwa, 57, “is a violent individual who presents a danger to the community,” U.S. District Judge Linda Reade said.

“There isn’t a doubt in my mind that he was an active participant, indeed a leader, of the genocide in Rwanda,” Reade told a courtroom in Cedar Rapids, Iowa, where Ngombwa lived and raised a family for two decades.

The sentence following his conviction for immigration fraud caps a case that the Anti-Defamation League has called one of the most significant U.S. human rights prosecutions in recent years.

Federal prosecutor Rich Murphy said Ngombwa was a local leader of an extremist party during the genocide, in which the majority Hutu killed an estimated 800,000 Tutsis in an effort to destroy their ethnic rivals after peace talks collapsed. He said that Ngombwa wielded a machete as he personally butchered Tutsis, looted properties and drove a youth militia around the country to carry out mass killings of people seeking refuge in locations such as churches and a children’s orphanage.

Murphy glared at Ngombwa across the courtroom as he described what he called the “unspeakable acts” he committed during the 100-day genocide that killed one-tenth of the country’s population.

Murphy said that Ngombwa had his own home and family protected by military forces “while he went out and killed.” Ngombwa fled the country rather than face justice, falsely claiming he was a genocide victim in order to gain U.S. refugee status for himself, his wife and several relatives, Murphy said.

Murphy displayed a photo of skulls of victims that showed they had been clubbed to death as he urged Reade to consider their suffering in sentencing Ngombwa. He compared Ngombwa to notorious criminals such as mob boss Whitey Bolger who lived in hiding after committing “unfathomable” acts of violence.

Reade said she was convinced of Ngombwa’s guilt in the genocide but that she’d leave punishment for those acts to authorities in Rwanda, where he’s under indictment and will be deported after his sentence. She focused on the need to protect the public and the “aggravating factor” that several relatives gained entry into the U.S. through Ngombwa’s lies.

The genocide allegations shocked acquaintances of Ngombwa in Iowa, where he was known as “Ken,” a devout Christian and a father of eight successful children.

U.S. Immigration and Customs Enforcement, which has a unit dedicated to catching alleged human rights violators, has arrested 380 such individuals since 2003. But the prosecution was the first of its kind in the northern district of Iowa, said U.S. Attorney Kevin Techau.

Ngombwa was convicted at trial of falsely telling authorities that he was the brother of an exiled Rwandan prime minister and therefore subject to persecution. That claim was the basis of the decision to allow his family to resettle in the U.S. in 1998 from a refugee camp in Tanzania where his family had been living.

Ngombwa worked as a school janitor and hotel employee and was active in his church. He had a clean record until 2013, when he was arrested for arson and insurance fraud after police said he intentionally burned down his home, which was built by Habitat for Humanity.

By then, investigators were looking into allegations that Ngombwa had participated in the genocide. He was indicted on immigration charges in 2014 after an investigation that included U.S. agents based in South Africa, who traveled to find witnesses in Rwanda.

Ngombwa’s attorney, Ray Sheets, said his client denies involvement in the genocide or that he was a leader in the extremist MDR-Power party. He said Ngombwa was known as a good and kind person to his supporters.

At trial, Ngombwa denied claiming he was the brother of former prime minister Faustin Twagiramungu, who lives in exile in Belgium. He insisted he meant he was Twagiramungyu’s “political brother,” agreeing with his positions.

Ngombwa waved to his children and friends as he slowly walked out of the courtroom in shackles.