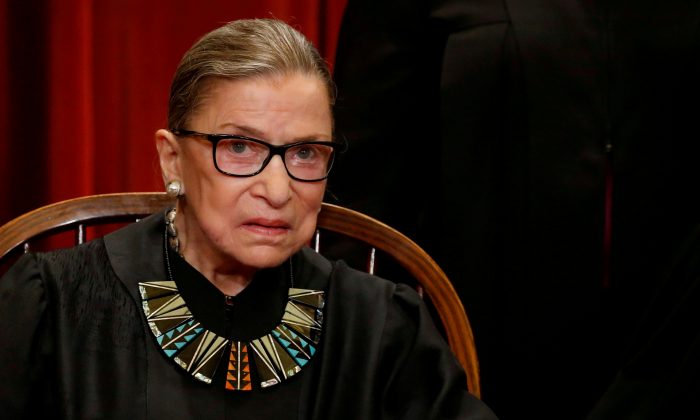 Ruth Bader Ginsburg Discharged From Hospital, Will Have Gallstone Procedure

Supreme Court Justice Ruth Bader Ginsburg was discharged from the hospital and is now home, according to the court.

Ginsburg, 87, spent one night at the Johns Hopkins Hospital in Baltimore to receive treatment for an infection caused by a gallstone. On Wednesday, she participated in court arguments via telephone while she was in the hospital.

Ginsburg will return to the hospital over the next several weeks, and she will have the gallstone removed eventually, the Supreme Court said in a statement.

“Justice Ginsburg has been discharged from the hospital. She is doing well and glad to be home,” the court statement said. “The Justice will return to The John’s Hopkins Hospital in Baltimore, Maryland, for follow-up outpatient visits over the next few weeks to eventually remove the gallstone non-surgically.”

On Tuesday, the court said Ginsburg, 87, was taken to the hospital.

She has suffered several health issues over the past several years, including multiple bouts with cancer. She was treated for a tumor on her pancreas in August of last year, and in December 2018, she had cancerous nodules removed from her lungs.

Ginsburg in January announced she was “cancer-free” during an event.

“As different as we are, the court is the collegial place I’ve ever worked,” she also said of her colleagues in December. “And I can tell you that from a personal experience surviving four cancer bouts with my colleagues around me and made it possible for me not to miss a single case.”

She also suffered colorectal cancer in 1999 and pancreatic cancer in 2009.