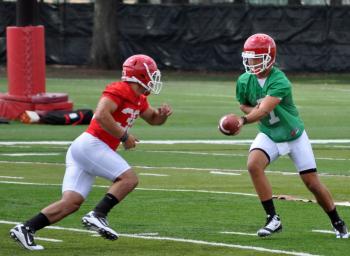 Matt Sugam
View profile
Follow
biggersmaller
Print
PISCATAWAY, New Jersey—When looking down the Rutgers roster, the reoccurring theme is youth. Most of the team is made up of players that have three to four years of eligibility left.

Accordingly, true sophomores will be calling signals on both sides of the ball.

Quarterback Tom Savage will lead the offense while Steve Beauharnais will be the quarterback of the defense as the middle linebacker.

As a true freshman, Savage began his collegiate career at the start of the second half of the opening game against Cincinnati last year. He went on to start 11 of the next 12 games. (Savage sat out against Maryland after suffering a concussion the week prior against Florida International).

Savage went on to have the most passing yards and touchdowns for a true freshman in Big East history. He finished the season with 2,211 yards and 14 touchdowns, completing 52.3 percent of his passes and throwing just 7 interceptions.

The Springfield, Pa., native’s success on the field as a freshman has those looking on expecting a big season. He was named to the Davey O’Brien National Quarterback Award watch list along with the Maxwell Award watch list.

But preseason awards nominations do nothing to build on a successful freshman campaign. Training camp does.

“My expectations over the summer are to keep improving my consistency,” Savage said.

Consistency is key for the success of Savage, because despite the good numbers, he did have an up and down season—typical of a true freshman.

Savage wants to see stability with the unit he’s leading. As for how he’s handling the leadership role, Savage feels like he’s doing well.

His No. 2 receiver, redshirt sophomore Tim Wright, went down with a knee injury and will miss the entire season.

“The biggest thing I said [to the receivers] was go out there and play hard and never take anything for granted because a kid [Wright] worked so hard all year around," Savage said. “So everyone’s got to go hard every play and really enjoy it out there.”

But when it comes down to it, Savage can only say so much. His team has to go out and prove it on the field. And that’s exactly what he plans to do come the season.

“We have a high powered offense and we’re ready,” Savage said. “Now we got to prove it on Saturdays.”