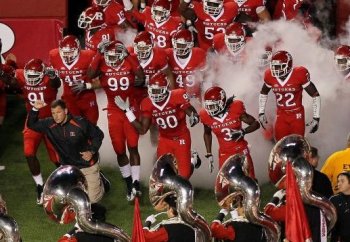 In this file photo, head coach Greg Schiano of the Rutgers Scarlet Knights leads his team onto the field to play against the Connecticut Huskies. Rutgers's player Eric LeGrand was injured and paralyzed after a tackle during a weekend game against Army. (Jim McIsaac/Getty Images)
NFL

James Fish
alias for Chris J
View profile
Follow
biggersmaller
Print
Rutgers defensive tackle Eric LeGrand was paralyzed from the neck down after breaking two vertebrae during a game against Army on Saturday.

LeGrand is in stable condition in the Hackensack University Medical Center, and he will stay there at least "for the foreseeable future," according to a statement from Rutgers's athletic department.

Le Grand fractured his third and fourth cervical vertebrae while making a tackle late in the fourth quarter of the Army–Rutgers game. He was taken to the Medical Center where he underwent emergency surgery.

Rutgers coach Greg Schiano visited LeGrand before and after surgery, and said to AP, "Eric's spirits were as good as you can expect… He was cognizant of me being there, his mom, everybody.”

“We want to say thank you to everyone for all of your prayers, kind words, and well wishes,” the LeGrand family said in a statement. “We appreciate every single thought. Eric is in good spirits and we are praying for a full recovery.”

At the postgame press conference, Rutgers coach Greg Schiano tried to explain how he felt seeing one of his players injured. “It's all tough stuff,” he told reporters. “When you coach these kids, they're your kids. That is the thing I don't know if everybody gets. It's not pro football. Those are your kids.”

“Eric, his family and the Rutgers Football family believe he will recover,” Schiano said in the Rutgers statement. “We ask our fans and the entire Rutgers community to believe and pray for Eric as he begins the recovery process.”