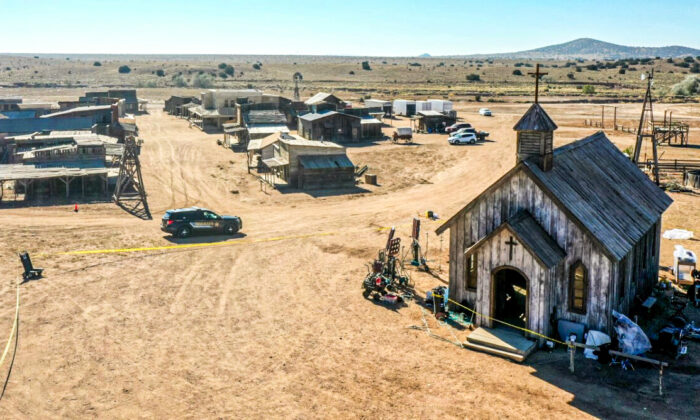 This photo shows the Bonanza Creek Ranch one day after an incident left one crew member dead and another injured in Santa Fe, N.M. on Oct. 22, 2021. (Roberto E. Rosales/Albuquerque Journal via AP)
Entertainment News

A crew member who was part of the wrap team on the production of Western movie “Rust” may lose his arm after he was bitten by a venomous spider.

Jason Miller, a lamp operator and pipe rigger, was bitten by a brown recluse spider while packing up the set and started to experience severe symptoms within days that included necrosis of his arm and sepsis, according to a GoFundMe fundraiser organized by Miller’s family.

The incident comes just weeks after the on-set shooting death of Halyna Hutchins, a cinematographer who died after a .45 caliber Colt pistol held by Alec Baldwin was discharged at the Bonanza Creek set in New Mexico.

“[Miller] has been hospitalized and endured multiple surgeries each day as doctors do their best to stop the infection and try to save his arm from amputation,” his family said.

“It will be a very long road to recovery for Jason if the medical team … is able to save his arm,” they said. “If under worse circumstances he loses his arm, this is a life-changing and devastating event.”

Baldwin recently spoke out about the shooting incident, saying Hutchins “was my friend” and the event was a “one in a trillion.”

Baldwin also acknowledged that he doubts the production of “Rust” will ever be completed. No charges have been ruled out in the case so far and the investigation is still ongoing.

Brown recluse spider bites can lead to infections, necrosis, and permanent scars. The brown recluse is one of three spiders with medically significant venom and is found in the Midwest and the southern United States.

“The brown recluse belongs to a group of spiders commonly known as violin spiders or fiddlebacks. The characteristic fiddle-shaped pattern is located on the top of the leg attachment region (cephalothorax). Because they are secluded and withdrawn, as their name implies, the brown recluse avoids open spaces,” according to the U.S. Occupational Safety and Health Administration agency. “Brown recluse spiders are dangerous and they can bite and inject toxic venom.”

They’re golden brown and often have a “dark violin/fiddle shape” on the leg attachment region. The brown recluse has six eyes instead of eight eyes like most spiders, the agency says. The recluse’s eyes are arranged in pairs on either side.

The bite can cause a “systemic reaction within 24 to 36 hours characterized by restlessness, fever, chills, nausea, weakness and joint pain,” the agency adds. “Tissue at the site of the bite and the surrounding area dies and eventually sheds.”