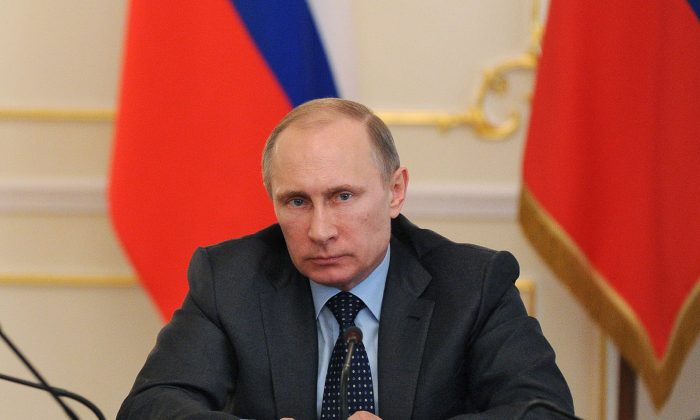 TEHRAN, Iran—Russia’s President Vladimir Putin visited Tehran on Monday for talks with Iranian leaders that focused on the Syrian crisis and an international peace plan intended to end the conflict.

During his meeting with Iran’s Supreme Leader Ayatollah Ali Khamenei, both Putin and the top cleric warned against any effort to impose a political settlement on Syria.

Putin underlined that stance after a later meeting with President Hassan Rouhani. “There is no other way to reach a long-term settlement of the Syrian problem except through political talks,” he said.

Khamenei accused the United States and its allies of trying “to achieve through diplomacy and at the negotiating table the goals they could not achieve by military means in Syria.”

“This must be prevented through wisdom and active interaction,” Khamenei told Putin at the start of their meeting that lasted more than an hour and a half.

Putin’s visit comes as Russia, the United States, France and others are talking about possible joint action against the Islamic State (ISIS) following the terror attacks in Paris and the downing of a Russian passenger jet in Egypt — both attacks claimed by ISIS. Putin’s trip also comes on the heels of agreement on an incomplete peace plan that calls for talks between Syrian President Bashar Assad and his foes.

Moscow and Tehran have been the key backers of Assad throughout his nation’s civil war, which has killed over 250,000 people and turned millions into refugees.

Russia has shielded Syria from international sanctions, and on Sept. 30 it launched an air campaign against ISIS and other insurgents, while Tehran has sent military advisers to shore up Assad.

Putin, on a one-day visit to attend a gas exporting nations’ summit, praised Iran for its support of Russia’s operation in Syria.

“All that has been done in coordination with our Iranian partners and without their help it would have been impossible,” he said

“While some countries only imitate action in the fight against terrorism, our two countries have shown how to deal with the issue in a serious way,” said Rouhani.

The peace plan put forward by 17 nations a day after the horrific Paris attacks sets a Jan. 1 deadline for the start of negotiations between Assad and the Syrian opposition.

“The Syrian crisis must and will be decided by political means,” Putin said during a meeting with his Turkmen counterpart, President Gurbanguli Berdymukhamedov, on the sidelines of the gas summit.

The Turkmen leader voiced uneasiness about Russia using the Caspian Sea for some of the strikes on Syria, but Putin said using the Caspian would continue “for as long as we see necessary to punish the culprits” behind the plane attack.

The proposal, which seems to draw heavily on a recently circulated Russian initiative, states that “free and fair elections” would be held according to a new constitution within 18 months. To clarify the timeline, the State Department said last week that the clock starts once Assad’s representatives and opposition figures begin talks on a constitution. The vote would determine a new parliament, though not necessarily a new president.

The plan says nothing about Assad’s fate, and does not say which of Syria’s many opposition factions would take part in the negotiations.

Russia and Iran both have bristled at demands for Assad to step down, saying his future must be decided by the Syrians as part of the peace process. But some have speculated that Moscow could be prepared to see Assad phased out of power as part of a deal that would guarantee stability in Syria and protect Russia’s interests there. Tehran is widely seen as taking a more rigid stance.

Shiite powerhouse Iran has staunchly backed Assad, who belongs to Syria’s Alawite minority, an offshoot of Shiite Islam, seeing him as a bulwark against its archrival, Saudi Arabia, and other Sunni monarchies of the Gulf. Tehran has sent more advisers to Syria in recent weeks, reportedly including Gen. Qassem Soleimani, who heads the elite Quds Force of the Revolutionary Guard. Iran says it has sent advisers but no combat forces to Syria.

Taking advantage of the Russian airstrikes, the Iranians and Hezbollah have spearheaded the ongoing Syrian offensive intended to win back some ground after a string of losses earlier this year.

Moscow has closely coordinated its air campaign with Tehran, with Russian warplanes flying over Iran and Iraq to avoid the airspace of Turkey and other NATO members.