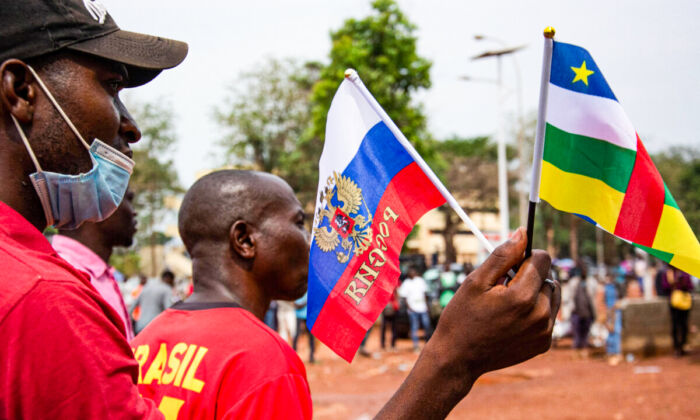 Russian and Central African Republic flags are waved by demonstrators gathered in Bangui on March 5, 2022 during a rally in support of Russia. (Photo by Carol Valade/AFP via Getty Images)
World

The event aimed “to honor Russia’s brave soldiers,” according to the invitation seen by The Epoch Times.

Since the war in eastern Europe began, President Cyril Ramaphosa’s administration has rebuffed requests for meetings from Ukrainian diplomats.

South Africa’s governing party the African National Congress (ANC), like many others in Africa, forged close ties with Moscow in the 1950s and 1960s when the Soviet Union supported the continent’s myriad wars against “colonialist oppressors” with money, weapons, and military training.

Many of Africa’s current political elite were educated in Russia, including ANC veteran Tokyo Sexwale, who received military training there in the party’s armed wing in the early 1970s.

“The Russians gave me instruction in explosives and also marksmanship with AK47s and Makarov pistols,” Sexwale recalls.

He came back to South Africa in 1976 but didn’t get much time to put his Soviet-inspired skills into practice.

A few months after his return from Moscow, a young Sexwale was involved in a shootout with the apartheid government’s security forces and wounded.

He was later convicted of terrorism and imprisoned on Robben Island, along with future president and ANC leader, Nelson Mandela. They were inmates together for 13 years, both released in early 1990 to play pivotal roles in talks towards democracy with the then Nationalist government.

“Because of freedom fighters’ experiences in the USSR, and for the support that Russia gave and continues to give to Africa along with China, you won’t hear much criticism of Russia and communism on the continent,” he explained.

Most African countries abstained from the vote seeking to condemn Russia for its invasion of Ukraine during a special meeting of the UN General Assembly.

In southern Africa, Russia’s most famous firearm, the Kalashnikov assault rifle, more commonly known as the AK47, is part of both Mozambique’s and Zimbabwe’s coat of arms. The weapon is a much-romanticized symbol of Africa’s “victorious” liberation struggles.

The continent remains a major importer of Russian weapons and military equipment.

Given this context, says Dirk Kotze, a professor of politics at the University of Johannesburg, it’s “not surprising” that only a handful of African governments have condemned the Kremlin’s actions in Ukraine.

When South Africa’s foreign ministry did exactly that, by releasing a statement calling on Putin to withdraw his forces immediately last Friday, Ramaphosa was “very unhappy” with its tone.

“We don’t want to offend Putin. I can tell you now that the president is very worried about what’s happening in Ukraine and doesn’t agree with what Putin has done.

“But you have to remember that Russia is a fellow BRICS member. Rich countries like America and those in Europe can afford to alienate Russia. Poorer nations like ours cannot,” said an official close to the former trade unionist turned super-rich businessman.

BRICS is a trade bloc of countries that are traditional allies and includes Brazil, Russia, India, China, and South Africa.

Kachur says Moscow largely withdrew from the continent after the Cold War ended and the Soviet Union melted.

Russia’s pivot to Africa was announced in 2019 in the Black Sea port of Sochi, where leaders from 50 African countries met Russian officials at the inaugural Russia-Africa Summit.

After those talks, the Kremlin launched a Russia-Africa secretariat announcing Africa would henceforth be a “priority.”

Moscow’s promised investments in Africa didn’t materialize, according to Kotze. Instead, African observers saw more boots of Russian mercenaries in the continent’s wars against terror groups such as Islamic State. Russian “security consultants” are also propping up several military juntas in Africa, for example in Mali.

North Africa has for decades been a bastion of support for Moscow, which has provided regional armies with military hardware. More recently, Russia has sponsored large energy projects in Algeria and Egypt.

“The anti-West narrative is very strong. Russia is trying to find allies in fighting Western sanctions. At the same time, Russia is offering to African countries support in the UN dialogue, in the global dialogue, where Russia has strong representation. It supports restructuring the UN system, to allow more equal inclusion of African countries.”

She adds that while Russia continues to promote nuclear power across the continent, it seems particularly interested in military cooperation and in forging a strong presence in Africa’s information space.

For pro-democracy groups, this is concerning, given Moscow’s apparent involvement in cybersecurity attacks across the world, most notably in the United States.

“In Mozambique, the Soviet Union supported Frelimo, the party that remains in power, and Russian specialists have been working in Mozambique since independence, in defense, health, and public service.”

In Libya, Russia is supporting its proxy warlord Khalifa Haftar with weapons and mercenaries from its Wagner Group, which employs former Russian defense-intelligence troops. Wagner is performing a similar role in Mali.

In Sudan, Russia has a strong alliance with the military government in Khartoum and wants its navy to have free access to Red Sea ports, most notably Port Sudan, according to Dr. Andrews Atta-Asamoah of South Africa’s Institute for Security Studies.

He says Russia is also broadening its interests in central Africa, in an effort to influence the region’s oil- and mineral sectors.

In southern Africa, Angola was a major ally of Moscow during the Cold War. Its current leader Joao Lourenço also received military training in the Soviet Union and the country’s diamonds, gold, and oil will no doubt appeal to many in the Putin circle.

Kachur is also noticing a stronger Russian presence in Zimbabwe.

Moscow was a strong supporter of former president Robert Mugabe and continues to lobby vociferously for an end to sanctions against the southern African nation.

“Unlike most major external partners, Russia is not investing significantly in conventional statecraft in Africa—economic investment, trade, and security assistance. Rather, Russia relies on a series of asymmetric (and often extralegal) measures for influence—mercenaries, arms-for-resource deals, opaque contracts, election interference, and disinformation,” according to Joseph Siegle, director of research at the Africa Center for Strategic Studies in Washington DC, writing in the Brookings Institute’s “Foresight Africa 2022” report.

Kachur points out that the Russian government has been “very strategic: since the days of colonialism by sponsoring the education of especially the sons of political and business elites in Africa.

“This creates a number of politicians, businessmen, as well as other influential people in Africa that understand Russian mentality, often speak the language, and are very willing to collaborate and cooperate with Moscow.”

She’s convinced that one of the factors that initially sparked the Putin regime’s renewed drive into Africa was Washington-led sanctions against it introduced following Russia’s first invasion of Ukraine in 2014 when it annexed Crimea.

The new wave of sanctions against Putin, his government, and his oligarchs will result in the Kremlin trying to solidify and expand its presence in Africa, Kachur has argued.

So, when the rest of the world asks why Africa seemingly supports Putin’s attack on Ukraine, Siegle has the answer: “The ‘partnerships’ that Russia seeks in Africa are not state but elite-based. By helping these often illegitimate and unpopular leaders to retain power, Russia is cementing Africa’s indebtedness to Moscow.

“This strategy works for Russia and the respective leaders who gain international diplomatic cover, resources to consolidate power domestically, a mercenary force, arms, and revenues from resource deals.

“However, Russia’s opaque engagements are inherently destabilizing for the citizens of the targeted countries, resulting in stunted economic development, human rights abuses, disenfranchisement of African citizens, the perpetuation of illegitimate governments, and social polarization.”