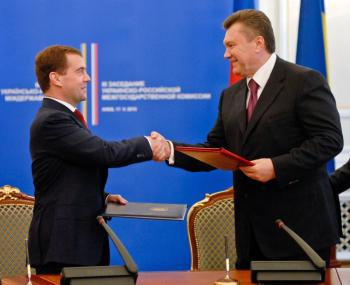 By Andrey Volkov
Print
KYIV, Ukraine—Russian President Dmitry Medvedev made his first official visit to Ukraine Monday, breaking the deadlock after years of tension and suggesting a range of new cooperation.

During the presidency of Yanukovych's predecessor, pro-Western Viktor Yushchenko, Ukraine-Russia ties were strained, with Moscow refusing to talk to Kyiv because of irretentive policies toward Russia. Russian business was sidelined in Ukraine.

“Finally there is a worthy Ukrainian partner. … It is very important when your partner answers for his words and does not represent fickle political interests … but the strategic interests of his nation,” Medvedev said.

"These should be absolutely pragmatic approaches … no unilateral decisions, but full mutual benefits of these projects.”

Since Yanukovych won the presidential elections in February, Russian-Ukrainian ties have improved, with top leaders from both countries holding frequent meetings.

Ukrainian opposition parties are not satisfied with the progress in mutual relationships as they see Yanukovych as weak in protecting national interests.

Yanukovych has promised not to harm the country’s interests.

The key deal causing heavy resistance from the opposition parties during ratification in Ukraine’s Parliament last month was to extend the stay of Russia’s navy in the Crimean Peninsula until 2042, in exchange for a cheaper gas price for Kyiv.

During Medvedev’s visit to Kyiv demonstrations were forbidden in the center of the capital; some activities of the national movement Svoboda were canceled. The group protests Russia having close ties with Ukraine. Instead, a demonstration out of the center was held with a heavy presence of security guards looking on.