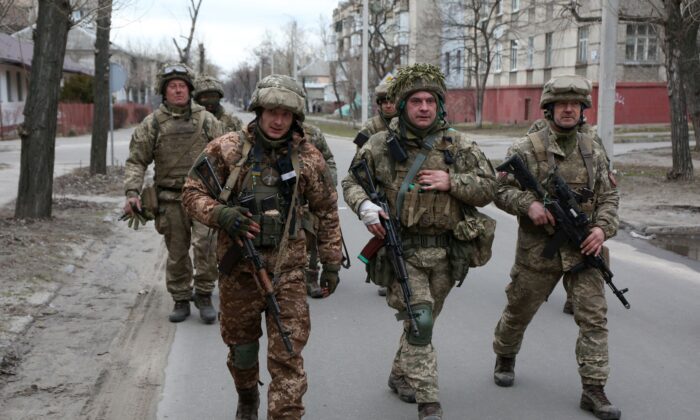 Members of the Ukrainian Military Forces patrol in the small town of Sievierodonetsk, Lugansk Oblast, on Feb. 27, 2022. (Anatolii Stepanov/AFP via Getty Images)
Viewpoints

For the second time in my adult life a major shock seems to have made people serious about defence. It remains to be seen how serious. But like 9/11, the Russian invasion of Ukraine has blown away any number of comforting illusions. So now what do we do?

In the short run we seem to be doing more, faster, and better than I had feared. I’m still not sure why “selected” Russian banks were turfed out of SWIFT and not the whole batch. There are times to ratchet up pressure and times to go all in… so to speak.

So to speak because Western nations are also providing Ukraine with lethal weapons. And those of us who lived through the Cold War, which many thought unlikely at the time, recall that everyone used to exercise extreme caution, even the Soviets sometimes, because shooting wars could spiral into nuclear ones.

For instance, if shipments of anti-tank and anti-aircraft missiles seem likely to turn the tide, the Russians might target them before they cross the Ukrainian border. Do we shoot back? I’m surprised how little people seem to be concerned about the possibility for escalation in that manner, even given habitual modern frivolity about what Kipling called the Gods of the Copybook Headings.

Speaking of the Cold War, you might think 2022 is the third time people had gotten serious. But while Ronald Reagan and Margaret Thatcher were enormously successful, they operated in an environment where reputable opinion was largely convinced that Reagan was a senile warmonger and Thatcher a relic. Don’t forget that the Gipper’s proposed ballistic missile defence, ridiculed as “Star Wars,” never really got off the ground because prevailing wisdom was that being able to shoot down incoming communist nuclear weapons was bad, and mentioning the similar Soviet program was vulgar.

9/11 was different. A few voices were raised in shrill opposition to vigorous action, and in denunciation of the West as the real terrorists, while the press predicted an Afghan quagmire. But by and large these were self-parody, and at least until the Iraq War went bad, we decided we had overwhelming military superiority but no real idea how to use it constructively so we should go back to sleep, and Afghanistan… um… turned into a quagmire. And gradually the seriousness ebbed away.

It’s back. For now, anyway. Even Germany, long very soft on Ostpolitik, is arming Ukraine openly and just pledged to double its defence budget and finally hit the long-promised 2 percent of GDP all NATO members are formally committed to, although everybody knew they were lying.

Canada should too. Doubling is a minimum, in fact, because our spending has been so low for so long, and our procurement as inept in practice as idiotic in theory, basically a job creation program, that we are in a very deep hole. We need aircraft, warships and logistical ships, munitions, pistols, and soldiers. In short, everything.

Including better cyberdefences. If you ask official Ottawa you’ll get the usual official guff. But if you look at what they say about what we can see, you realize reassuring nonsense is the only military asset we have stockpiled. And then there’s ballistic missile defence.

For many years it has been one of those things that is not debated on the merits. Rather, you are stricken from the social register for taking any interest in it. Thus, despite everything going on in the world, Canada has been militantly against being able to shoot down so much as a rogue North Korean or Iranian missile, even though a few well-placed EMP blasts could kill millions of us by shutting down all the infrastructure and most of the vehicles. No more, surely.

Of course, to double defence spending means finding money. Not play money. Not borrowed money. Not quantitative easing. So we need to get serious about budgeting too, having blown the roof off spending while brushing Parliament aside so casually we didn’t bother having a budget, even though Parliament’s raison d’etre and modus operandi are both yanking on the purse strings.

Which means we need to get serious about how we govern ourselves. And why. Is the primary function of the state to give us all free stuff, or to safeguard our lives, liberties, and property? Because it can’t be both, and the ultimately fruitless attempt to do the former puts the latter in serious jeopardy. Over the long run for sure and increasingly in the short run in a world where a crisis like that in Ukraine can erupt suddenly.

I know we were laughably unprepared for both world wars too, and the second seemed to unfold with terrifying rapidity. But it was nothing to the pace at which technology and machines can move today. So are we going to get serious?