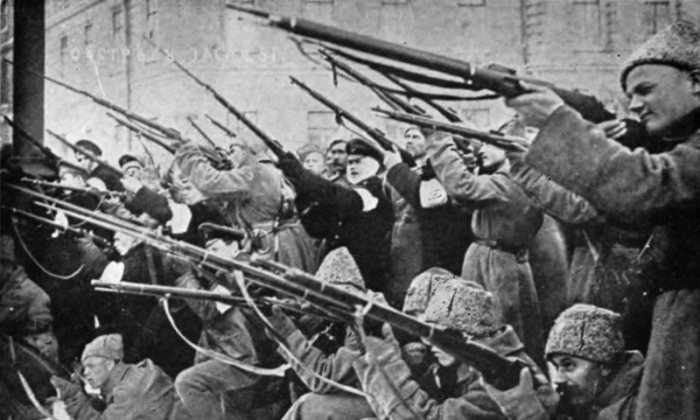 Rebels in St. Petersburg firing on Imperial Russian police in the first days of the February Revolution. (Public Domain)
The Dead End of Communism

Rise of the communist bloc was an exercise in subversion, terror, and mass murder

A hundred years ago, World War I was in its final, brutal years. Millions of men had died in the unprecedented slaughter made possible by the latest advances in modern technology.

For imperial Russia, heavy casualties and humiliating defeats meant economic hardship and social disorder on the home front. And in March 1917, the people of St. Petersburg, the imperial capital, rose up in armed revolt.

After the violence of the next few days killed 1,300 people, Czar Nicholas II abdicated in favor of his brother, Grand Duke Michael Alexandrovich. When the duke did not accept the throne, the rebels established the Provisional Government. It came with the promise of reforming the Russian government, and a popular vote was planned to determine whether the nation was to remain a monarchy or turn to republicanism.

Known as the February Revolution (as the Julian calendar was used in Russia at the time), the insurrection did not lead to democracy but was instead the first in a series of events that led to the establishment of Vladimir Lenin’s one-party communist dictatorship.

This was a new form of tyranny, one that went on to directly cause the deaths of at least 100 million people up to the present day. At least 30 million of those killed were Russians and people of other nationalities under Soviet rule.

From Radical Faction to ‘Majority’

Around the turn of the 19th century, various shades of communism and socialism were popular in the waning Russian Empire, and Lenin’s Bolsheviks were merely a splinter group of the larger Russian Social Democratic Labor Party. The Bolsheviks dispensed with some anarchist elements of Marxist theory in favor of a Party elite that would lead the undirected masses.

These views clashed with the mainstream of the Party. In a propaganda coup, Lenin’s group secured the name Bolshevik, meaning “majority,” even though it was the Menshevik (“minority”) faction that better represented the Party’s mainstream.

This was a new form of tyranny.

Pioneering the subversion tactics that would be used across numerous future communist movements, the Bolsheviks undercut their more urbane fellow socialists by reducing Marxist ideology to the crudest rhetoric and never hesitating to change direction as suited the situation. Lenin condemned leftists as “infantile” for their insistence on strictly following Marxist principles; in his writing “Two Tactics of Social-Democracy in the Democratic Revolution,” he accused the Mensheviks of marching “side by side with the liberal and monarchist bourgeoisie.”

As the Provisional Government tried to juggle czarist conservatives with republican liberals and moderate socialists in a tenuous coalition all through 1917, the Bolsheviks acted to undermine the new government’s authority and policies. Lenin became famous for slogans such as “All Power to the Soviets” and “Peace, Land, and Bread,” going against the new government’s pledges to continue the war against Germany and establish elections on the future of Russia.

The Provisional Government was a dysfunctional mix of former imperial Russian nobles, hopeful liberals, and moderate leftists. In the eight months they held power between March and November, they were slow to hold the promised elections and launched a failed offensive that was supposed to push back the Germans.

Further, the political core of the Provisional Government marginalized the old imperial elites and military establishment. Prime Minister Alexander Kerensky, himself a member of the Socialist Revolutionary Party, declared that democracy had no enemies on the left, a sentiment that benefited the Bolsheviks.

Though the Bolsheviks had directed the St. Petersburg workers’ and soldiers’ councils (“soviets” in Russian) in helping to topple the czar, they had little interest in cooperating with the Provisional Government or supporting its elections. In keeping with Lenin’s elitist ideology, the Bolsheviks preferred to speak as the authority for their claimed constituency of workers, peasants, and soldiers, despite the fact that other political parties on the left and right received broad support from these groups.

When a disgruntled Russian general, Lavr Kornilov, marched his troops on St. Petersburg to put down the unruly Bolsheviks and to supposedly strengthen the Provisional Government, Lenin and his men used this as a pretext for mobilization. Though Prime Minister Kerensky put an end to Kornilov’s attempted coup, the Bolsheviks were now armed, and grew stronger by the day as soldiers deserting the front lines came home.

In November, the Bolsheviks launched the well-known October Revolution. In early 1918, the elections for the Constituent Assembly were finally held, but the Bolsheviks disputed the result and violently dissolved the democratic body. The Russian Civil War broke out soon afterward.

In July 1918, 15 months after he had abdicated, Czar Nicholas II, along with his empress and their five children, was languishing in Siberian exile under the watch of the Bolshevik troops. One night, orders came from the top, and they were shot following a brief reading of the death sentence.

Along with the disgraced monarch, about 10 million people died in the Russian Civil War that secured Lenin’s place as the world’s first communist ruler. Millions of the victims, aside from battlefield casualties, were peasants starved to death by the “war communism” policies of Lenin’s right-hand man, Leon Trotsky, who forcibly collected grain and other supplies to nourish the communist armies. Countless others were deemed “enemies of the people” and imprisoned, tortured, and killed in what was openly termed the “Red Terror.”

Following the destruction of the Provisional Government, non-Bolshevik leftists also became victims as Lenin and his circle furthered their dictatorial aims. The Mensheviks and the Socialist Revolutionaries were put off by what they saw as a betrayal of revolutionary principles in the replacement of the soviets’ autonomy with top-down directives.

As the civil war raged on, non-Leninist leftists frequently rose up in revolt, as in the famous episode at Kronstadt. Each time, the Bolsheviks crushed them with the same ruthlessness with which they destroyed their conventional enemies.

Wherever communism took root, from China to Cuba, Lenin’s bloody model was repeated, with virtually no exceptions. The Russian experience in 1917 marked the beginning of the worldwide communist movement, and the result was a century marred by factional infighting, mass murder, lawlessness, and wanton brutality.

Communism is estimated to have killed at least 100 million people, yet its crimes have not been fully compiled and its ideology still persists. The Epoch Times seeks to expose the history and beliefs of this movement, which has been a source of tyranny and destruction since it emerged.