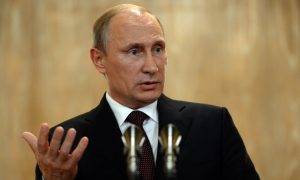 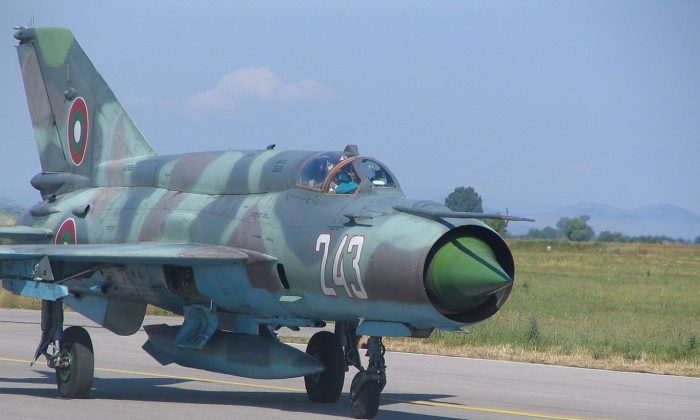 Bulgarian MiG-21, training with Americans, but maintained by the Russians. (Wikimedia Commons)
Europe

Modern relations between Bulgaria and Russia began about two centuries ago when Russia sought geopolitical advantages in the Balkans and strategic access to the Turkish Straits. Russia positioned herself as a guardian of Balkan Orthodox Christians in the Ottoman Empire, which included the people in latterday Bulgaria. With linguistic similarities also in common, the Russians became supporters of the 19th-century Bulgarian liberation movement against the Ottoman rule.

By the time of the Russian-Turkish war of 1877-78, Russia’s paternalistic approach to Bulgaria nurtured a kind of dependency mentality among many Bulgarians. After the Ottoman defeat and the subsequent congress of Berlin, Russia ended up with a mandate to supervise the Principality of Bulgaria that emerged.

Both the Bulgarian public and Russian-speaking elite were deeply in favour of Russian involvement as the army, police force and public administration were set up. Yet sentiment became more divided after 1885 as the question of full statehood moved up the agenda. And when Bulgaria embarked on a modernisation project in the late 19th century, it tacked towards the European mainstream and particularly Germany.

This continued until after the Yalta conference of 1945, when Bulgaria was relinquished to Soviet influence. For the next 45 years Soviet dominance built upon previous pro-Russian sentiments in Bulgarian society. This turned the country into a communist stronghold, the staunchest and most obedient Soviet ally.

Bulgaria lost prestige internationally and became heavily dependent on the Soviets. Even after the fall of the Communist regime in 1989, Bulgaria was hesitant for several years about which way to go. And in the intervening years of Euro-Atlantic integration, the pro and anti-Russian divisions have re-emerged at every challenge.

Bulgaria joined NATO (2004) and the European Union (2007), and signed an agreement with the US in 2006 for a joint military training facility within the country, all of which have been heavy blows to Russia. This has put Bulgaria in a precarious position because the Russians have various kinds of leverage over her.

Life’s Not a Gas

Bulgaria has remained energy-dependent on Russia due to the unwise political choices of several governments. Not only does Russia provide most of its gas, the Russian energy giant Lukoil owns Bulgaria’s only oil refinery. Lukoil and Gazprom also have a network of petrol and gas stations throughout the country.

Bulgaria depends on Russia for all of its nuclear fuel (though it recently signed a deal to have a new reactor built by Japanese-owned Westinghouse). The net result of this energy dominance is that Russia maintains a strong “energy lobby” in Bulgarian political and expert circles.

In recent months this lobby has been working overtime over the “South Stream” pipeline, which is being built from Russia across the Black Sea, through the Balkans to north-east Italy. Crucially this gives the Russians a second gas export route to Europe that doesn’t go through Ukraine. Bulgaria ordered work on the pipeline to stop in the summer under pressure from Brussels that it did not conform to EU law. It appears not to have resumed since.

Disagreements over the suspension were among various issues that helped bring down the Bulgarian coalition government in July. This led to an election earlier in October, where the pipeline was a key point of debate. The pro-suspension centre-right GERB party finished first, but it is not yet clear whether it can form a stable coalition.

Aside from energy, Russia is heavily interested in the Bulgarian military-industrial complex, most of whose equipment is Soviet-made and depends on Russia for maintenance. The outgoing Bulgarian defence minister was recently quoted saying this puts the country in a vulnerable position, particularly regarding its ageing jet fighters. Any question of upgrading with equipment from elsewhere runs counter to Russian interests, so is unlikely to be welcomed by Moscow.

Russian companies’ and citizens’ investments in Bulgarian property have meanwhile increased in recent years, while the Bulgarian tourist industry relies on Russian visitors. Russia is also good at using propaganda. It frequently puts a spin on assistance or benefits to Bulgaria as being “from Moscow with love”. This is attractive to those Bulgarians whose affection for Russia remains strong. And it suits Russia when the Bulgarians are unsure whether to look East or West, such as during the Ukraine crisis.

The Russians see this as an opportunity to tip the scales by playing one side against the other. This cropped up over South Stream, for instance, where there are rumours that the previous government would have allowed the pipeline work to continue despite the EU objections. Some observers believe that Russia will also have a hand in determining the make-up of the next coalition government.

If Bulgaria is to overcome its Russian obsession and inferiority complex, the elite needs to use more political imagination and be more willing to make difficult policy choices. It cannot handle its eastern neighbour alone, because Russia is much more powerful. If the EU and US are determined to play tough on Russia, Bulgaria is one of the places where they will have to face their opponent. The security context will be determined by whether the West stands firmly alongside Bulgaria, and whether the Bulgarian government sustains Russian pressure or opts to “play both ways”.

Bulgaria unfortunately has to survive in a swirl where the European mainstream meets the Russian current near the Turkish Straits. Having had to cope with the interference of Russia, Germany and Turkey throughout its existence, these countries still have the biggest stakes in Bulgaria’s future.

It is not that Bulgaria could become another Ukraine, since here Russia has always preferred to play in the shadows. There is no Russian-speaking population with an identity crisis that presents a similar opportunity. Rather it is a question of influence and political decisions. Being in NATO and the EU gives Sofia certain credentials with the West. But it has to strengthen these further to curb the pro-Russian drift and overcome the two countries’ complex and deep-rooted past.

Plamen is founder and director of StratCom – an independent think-tank for strategic communications, international public relations and public diplomacy. This article was originally published on The Conversation. Read the original article.