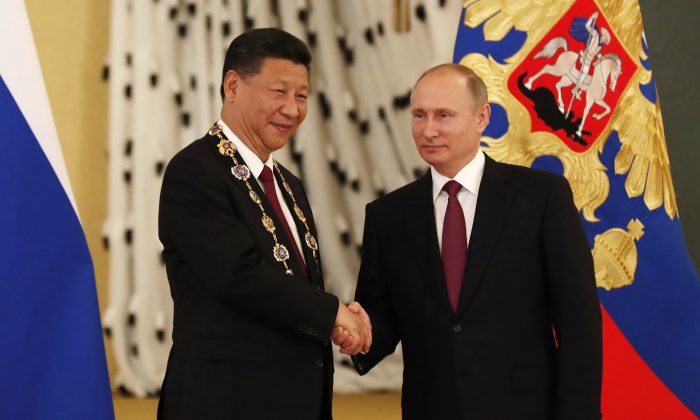 Russian leader Vladimir Putin (R) awards Chinese leader Xi Jinping the Order of St. Andrew the Apostle the First-Called during a ceremony at the Kremlin in Moscow on July 4, 2017. (SERGEI ILNITSKY/AFP/Getty Images)
Viewpoints

Vladimir Putin and Xi Jinping lead Russia and China—respectively the world’s second and third most powerful countries. Both appear solidly entrenched as leaders of their countries. And their leadership styles are being touted as effective alternatives to democracy in both economic and politico-military terms.

Both stand top of, if not the traditional dictator’s pile of skulls, at least dictatorships that, despite ostensible velvet gloves, are still willing to employ the iron fist to maintain control.

Nevertheless, one can go too far in excoriating their rule. Putin’s Russia is not Stalin’s USSR manifest until its collapse in 1989-91. The ordinary Russian is unlikely to land in a Soltzhenitsyn-style gulag, and a 2 a.m. “knock on the door” from the KGB’ successor is equally unlikely.

Read More
Chinese and Russian Regimes Vs. Democracies and the Rule of Law

That does not mean that today’s Russia is a warm and friendly, League of Women Voters commended regime. Trappings of real democracy, such as free speech and critical media, are thoroughly repressed, and effective Putin critics end up dead. He is dedicated to a “Make Russia Great Again” foreign policy designed to reassemble as much of the old USSR as possible, if not by direct conquest (Crimea) by influence and intimidation (Ukraine, Belarus, Baltic states). If not as personally popular as in previous years, he could probably win an “honest” election.

Likewise, Xi Jinping is not the murderous Mao Zedong. Instead, he is a ruthless, highly intelligent and bureaucratically skilled communist-in-name-only who has no need for a “Great Leap Forward” or “Cultural Revolution” to maintain political control. Modern China has harnessed high technology and predatory trading/fiscal practices to make it the second ranking global industrial power. Capitalism has worked for the PRC as evidenced by its 476 billionaires—a circumstance that should have Mao turning sommersaults in his Tiananmen Square tomb.

Nor is Xi without foreign policy ambitions albeit pursued less blatantly than Putin’s. Beijing considers the contested islands in the Sea of Japan and the South China Sea Chinese territory seized by others when China was weak. It has no interest in arbitration and dismisses the Hague’s Permanent Court of Arbitration as a western tool designed to promote European interests.

There also appears to be personal respect, if not necessarily friendship. Putin has visited China 19 times and in his June visit received the newly created “Friendship Medal”—perhaps in lieu of pandas for the Moscow zoo. Russia was the first country Xi visited after becoming president in 2013. And earlier in July, on the way to the G20, Xi stopped in Moscow and received the Order of Saint Andrew, Russia’s highest state award. Reciprocal “gongs” indicative of carefully complementary courtesy.

Thus, the very carefully evolving rapprochement between Moscow and Beijing (“like two porcupines making love”) is of geopolitical interest. Neither has direct existential interests in conflict: Putin cares naught about the South China Sea. Xi has not even tertiary interest in Crimea or Baltic states. Each has given perfunctory support to the other’s positions, e.g., Xi on Syria and Putin on South China Sea islands.

Essentially, each finds the other a useful counterweight against U.S. sanctions/tariffs.

This comity, however, can be overstated. Although they have held joint military maneuvers, including in the Baltic, and Moscow has provided Beijing with its top-of-the-line S-400 air defense missiles and Su-35 jets, Russia’s 2017 trade with China was only $90 billion (vs China’s-USA’s $636 billion). Even the much bruited about 30-year $400 billion natural gas sale is a secondary energy source for China but supplies vital alternative hard currency for Moscow.

However, for states tired of the messy fractious politics accompanying democracy and with populations little experienced with the benefits of western-style freedoms of speech, assembly, press, religion, and so on, both Putin and Xi present attractive paradigms.

Consequently, when Washington is picking fights with friends and allies (NATO and EU), its comparable disputes with Moscow and Beijing suggest we are over extended. Resolving vital issues such as North Korean and Iranian nuclear capability will require coordinated global attention. A Putin-Xi alliance could aid or thwart U.S. objectives.  We need to recognize this reality and adjust relations with both to promote our own objectives.