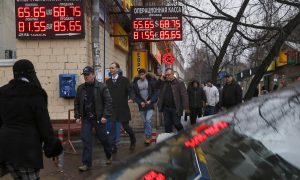 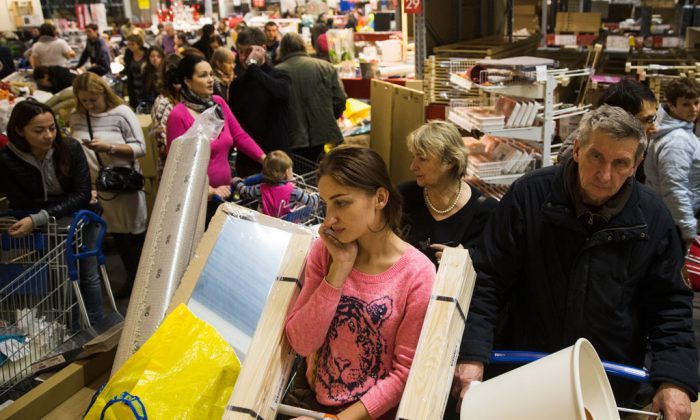 People wait in a line to pay for her purchases at the IKEA store on the outskirts of Moscow, Russia, Wednesday, Dec. 17, 2014. The collapse of the national currency triggered a spending spree by Russians desperate to buy cars and home appliances before prices shoot higher. Several car dealership were reported to have suspended sales, unsure how far down the ruble will go, while Apple halted all online sales in Russia. (AP Photo/Pavel Golovkin)
Europe

MOSCOW—Russian consumers flocked to the stores Wednesday, frantically buying a range of big-ticket items to pre-empt the price rises kicked off by the staggering fall in the value of the ruble in recent days.

As the Russian authorities announced a series of measures to ease the pressure on the ruble, which slid 15 percent in the previous two days and raised fears of a bank run, many Russians were buying cars and home appliances — in some cases in record numbers — before prices for these imported goods shoot higher.

The Swedish furniture giant IKEA already warned Russian consumers that its prices will rise Thursday, which resulted in weekend-like crowds at a Moscow store on a Wednesday afternoon.

Shops selling a broad range of items were reporting record sales — some have even suspended operations, unsure of how far the ruble will sink. Apple, for one, has halted all online sales in Russia.

“This is a very dangerous situation. We are just a few days away from a full-blown run on the banks,” Russia’s leading business daily Vedomosti said in an editorial Wednesday. “If one does not calm down the currency market right now, the banking system will need robust emergency care.”

Alyona Korsuntseva, a shopper at IKEA in her 30s, said the current jitters surrounding the Russian economy reminded her of the 1998 Russian crisis when the ruble tumbled following the government’s default on sovereign bonds.

“What’s pressuring us is the fact that many people (back then) rushed to withdraw money from bank cards, accounts,” she says. “We want to safeguard ourselves so that things wouldn’t be as bad they were back then.”

Consumers are buying durable goods as they are seen as better investments than most Russian stocks. And, an overwhelming majority of Russians cannot afford to buy land or real estate.

Earlier this week, the ruble suffered catastrophic losses as traders continued to fret over the combined impact of low oil prices and Western sanctions over Russia’s involvement in Ukraine’s crisis.

Some signs emerged Wednesday that the ruble’s freefall may have come to an end and the currency could recover, at least in the short-term. After posting fresh losses early Wednesday, the ruble rallied more than 10 percent to around 60 per dollar at 9 p.m. Moscow time (1800 GMT, 1 p.m. EST).

Analysts credited a series of reassuring statements from the Central Bank and the government for the improving ruble backdrop.

First, Deputy Finance Minister Alexei Moiseyev said the government will sell foreign currency from its own reserves “as much as necessary and as long as necessary.”

Then the Central Bank announced an expanded series of measures to help calm the situation such as giving banks more freedom to increase interest rates on retail deposits and offering them more flexibility to deal with the ruble’s depreciation on their balance sheets.

Neil Shearing, chief emerging markets economist at London-based Capital Economics, said the “authorities have at last started to develop a strategy for containing the effects of the ruble’s collapse on the banking system and wider economy.”

Tom Levinson, chief foreign exchange and rates strategist at Sberbank CIB, agreed, saying the Central Bank could ease pressure on the ruble, even without massively spending its reserves.

“If they can provide measures that help secure the banking sector, provide confidence to investors and also to the population as a whole … that could be the first toward stabilizing the situation,” Levinson said in an interview. “Long way to go, but we are seeing some positive steps at last.”

The ruble’s tailspin continued Tuesday, despite a surprise move by Russia’s Central Bank to raise its benchmark interest rate to 17 percent from 10.5 percent — a move aimed to make it more attractive for currency traders to hold onto their rubles.

Should the current attempts to shore up the ruble fail, then the Russian authorities could be imposing capital controls.

However, Russia’s Economic Development Minister Alexei Ulyukayev has denied the government is considering doing so. While easing pressure on the ruble, the move would shatter Russia’s already tarnished reputation to investors.

Russian officials, meanwhile, have sought to project a message of confidence on state television, dwelling on the advantages of ruble devaluation, such as a boost to domestic manufacturing.

There are fears that the ruble could come under further pressure this week as President Barack Obama is expected to sign legislation authorizing new economic sanctions against Russia.

The German government’s coordinator for relations with Russia, Gernot Erler, said the economic crisis in Russia was largely the result of the drop in oil prices, not the sanctions imposed by the West.

“It’s an illusion to think that if the sanctions were to fall away tomorrow, the Russian economy would suddenly be all right again,” Erler told rbb-Inforadio on Wednesday.

From The Associated Press. Vladimir Kondrashov and Vladimir Isachenkov in Moscow and Frank Jordans in Berlin contributed to this report.