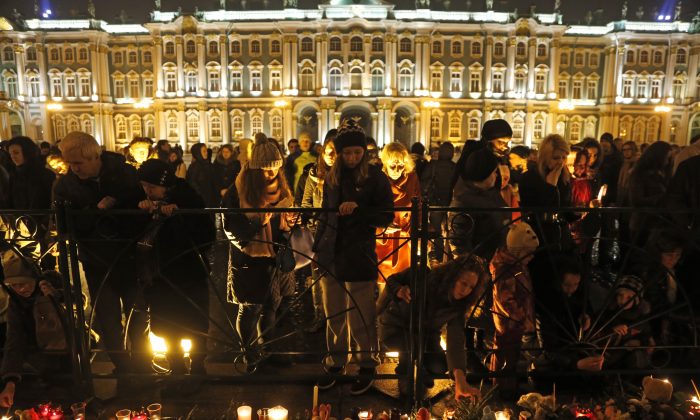 ST. PETERSBURG, Russia — In a massive outpouring of grief, thousands of people flocked to St. Petersburg’s airport Sunday, laying flowers, soft toys and paper planes next to the pictures of the victims of the crash of a passenger jet in Egypt that killed all 224 on board in Russia’s deadliest air crash to date.

“I can’t remain indifferent, there were so many people from St. Petersburg on the plane,” said Yelena Vikhareva, a 48-year old sales clerk who came to the airport with her son. “The pain is piercing the heart.”

Most of the victims, except for four Ukrainians and one Belarusian, were Russian, and the majority came from St. Petersburg, Russia’s second-largest city.

Metrojet’s A321-200 crashed over the Sinai Peninsula on Saturday morning, 23 minutes after it took off from Egypt’s Red Sea resort of Sharm el-Sheikh, a popular destination for Russian tourists.

Flags across Russia were flying half-staff on Sunday, the nationwide day of mourning declared by President Vladimir Putin, and Russian Orthodox priests conducted services to pray for the victims.

At St. Petersburg’s Pulkovo airport, a young woman wept as she brought a picture of one of the victims, the 23-year-old Darya Grigoryeva. She was unable to speak, saying only that Grigoryeva was her best friend since first grade of school.

Vladimir Povarov, 19, didn’t have any relatives or friends on the plane, but said he couldn’t help coming to the airport with flowers.

“We came here with my friends because we couldn’t remain indifferent,” he said. “We are frequent fliers, and it’s so horrible.”

St. Petersburg Gov. Georgy Poltavchenko said the city would provide compensations to the families of the victims and help organize funeral procedures. He ordered the mourning in the city to last for three days.

“The grief has shown that we stand together both in joy and in grief,” he said.

As evening came, thousands gathered at the Dvortsovaya Square in front of the Hermitage Museum to light candles. They let 224 red balloons into the air with names of the victims to mark their memory.

“I have brought this teddy bear here as there are many children among the victims,” said Galina Cherempei, a 26-year-old accountant.

Oleg Chizhov, a 27-year-old engineer, brought white roses to the square. “It’s a tragedy for the city and for entire Russia,” he said. “No one could stay indifferent.”

The reason for the crash remains unknown, but the plane’s flight recorders have been recovered and a team of Egyptian and Russian experts, assisted by engineers from France where the airliner was designed, have started working on them.

Alexander Neradko, head of Russia’s federal aviation agency, said Sunday the large area over which fragments of the plane were scattered indicated that it disintegrated while flying high. Neradko wouldn’t comment on a possible reason for the crash, saying the probe is ongoing.

Islamic State militants claimed Saturday that they “brought down a Russian plane over Sinai state with more than 220 Russian crusaders on board,” but the group did not provide any evidence to back up its claim. Russian Transport Minister Maxim Sokolov dismissed the claim Saturday after talking to Egyptian officials.

The plane’s wreckage was found in northern Sinai where Egyptian security forces have for years battled local Islamic militants who in recent months claimed allegiance to the Islamic State group. Militants in northern Sinai have not to date shot down commercial airliners or fighter jets.

German carrier Lufthansa, Air France and the Dubai-based Emirates have all announced they will no longer fly over the Sinai until the cause for the plane crash has been identified.

Alexander Fridlyand, a Moscow-based aviation expert, said in televised remarks that along with equipment malfunction, another possible reason for the crash could be a bomb placed in the plane’s luggage compartment.

In the context of Russia’s air campaign against IS and other militant groups in Syria, which Putin launched on Sept. 30, some in Russia thought that IS, also known as the ISIS, could be behind the crash.

“Everyone thinks it was the ISIS, these Islamic fundamentalists,” said Mikhail Kudryavtsev, a St. Petersburg resident.