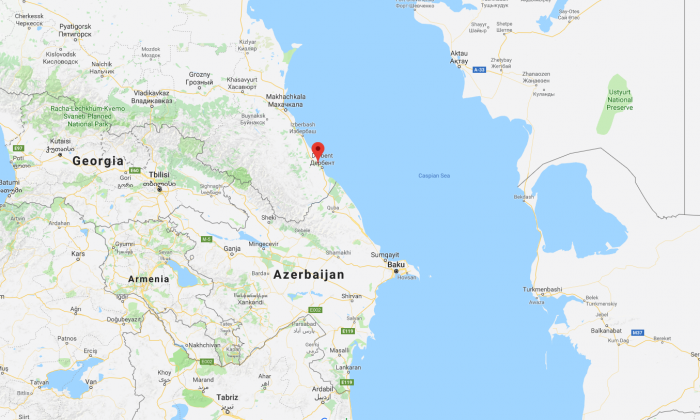 Dagestanskiye Ogni, on the Black Sea, near the Russian border with Georgia. (Screenshot via GoogleMaps)
International

Giving birth at home and alone would be a daunting prospect for many women.

One Russian woman, however, not only gave birth to a baby girl who weighed a whopping 13 pounds 14 ounces at home—she also did it all with no pain relief whatsoever, according to the Metro.

Sadly, however, doctors said that the large size of the baby may indicate that there is something wrong.

‘Of course, this is overweight, this is pathology,” a representative for a local health watchdog in southwest Russia said, according to the Metro.

“According to the medical team, the baby has problems with hearing. Other problems may occur in the future.’

The woman, 42, who lives in Dagestanskiye Ogni, in Russia has four other children.

Other than her age and a photgraph, no further details have been provided.

The record for the world’s heaviest healthy baby—22 pounds 8 ounces—has stood for an astonishing 63 years.

According to Guinness World Records, the boy was born in the city of Aversa, Italy, in September 1955.

Another record—even older–is sometimes quoted too, of a boy born in the United States in August 1879. That baby, who was born to a 7-foot-11-inch Canadian giantess, however, died 11 hours later. He weighed 23 pounds 9ounces and measured 76.2cm (30 inches).

Dr. Kristin Atkins, a specialist in maternal and fetal medicine at the University of Maryland School of Medicine explained to ScienceLive that like very small babies, large babies aren’t always healthier.

“The main nutrient that controls babies’ growth is sugar,” Atkins said. “Therefore, mothers with diabetes that have elevated blood sugars are more likely to have big babies,” she said.

The shoulders of babies over 10 pounds can also become trapped under the mother’s pelvic bones, potentially damaging the nerves in his neck, or breaking his collarbones or arms.

A year ago, an Australian woman, Nina Tassell, gave birth to a baby boy weighing nearly 13 pounds, in the front foyer of her house after a one-hour labor.