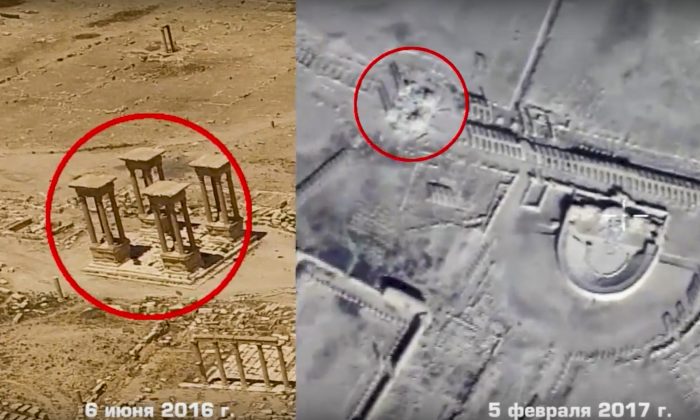 This photo combo, made from footage taken from the Russian Defense Ministry official website, purports to show the Tetrapylon, a set of four monuments with four columns each at the center of the colonnaded road leading to a Roman-era amphitheater on June 6, 2016 (L) and on Feb. 5, 2017 in Palmyra, Syria. (Russian Defense Ministry Press Service, via AP)
International

MOSCOW—Russia on Monday released footage from one of its drones in Syria, revealing for the first time the latest destruction to the ruins of historic Palmyra since it was recaptured by ISIS terrorists, as Syrian government forces pushed ahead on the ground in a new offensive to take the city back.

Syrian troops have advanced close to within 20 kilometers (12 miles) of the UNESCO heritage site for which Palmyra is famous and which has already suffered massive destruction at the hands of the ISIS terrorist group.

The drone footage, released in Moscow, showed ISIS militants have badly damaged the facade of the Roman-era theater and the Tetrapylon—a set of four monuments with four columns each at the center of the colonnaded road leading to the theater.

The video appears to show that only two of the 16 columns remain standing.

The footage also recorded sustained truck movements around the archaeological site, suggesting the militants could be preparing for further demolitions by bringing in explosives, warned the Russian Defense Ministry. It said Russian warplanes last week carried out more than 90 sorties to provide air cover for the offensive.

Meanwhile, in Geneva, the office of the U.N. envoy for Syria said the “formal start” of a new round of U.N.-brokered peace talks for the war-torn country is expected on Feb. 23.

Staffan de Mistura’s office said he was “actively engaged” in diplomatic efforts aimed at bringing Syrian government and opposition delegations back to Geneva for the first time since the talks were suspended amid an upsurge in fighting last April.

De Mistura had previously said the talks were expected to resume on Feb. 20 but his office said now the delegations would first hold preliminary meetings with de Mistura’s team in the Swiss city.

The Islamic State group has destroyed ancient sites across its self-styled Islamic caliphate in territories it controls in Syria and Iraq, perceiving them as monuments to idolatry.

Palmyra, which once linked Persia, India and China with the Roman Empire and the Mediterranean, first fell to ISIS militants in May 2015, when they held it for 10 months.

During that time, the extremists destroyed ancient temples and eventually emptied the town of most of its residents, causing an international outcry.

The extremists were eventually driven out by Russian and Syrian government forces, but they seized the town again in December.

The Russian ministry said that some 200 IS fighters have been killed in the new government offensive to retake Palmyra and that Syrian forces destroyed 180 “infrastructure objects” and 15 ammunition depots.

The drone footage, which the Russian Defense Ministry said was filmed earlier this month, also showed a central section of Palmyra’s theater lying in ruins.

Ahead of the Geneva talks with the opposition that are aimed at ending Syria’s nearly six-year civil war which has killed hundreds of thousands of people and displaced millions, the government said Monday it is ready to release prisoners in exchange for civilians or troops held by insurgents. Syrian state TV quoted an unnamed official as saying the offer comes ahead of a two-day preparatory meeting later this week in the Kazakh capital, Astana.

ISIS in Syria Destroys Part of Roman Theater in Palmyra

Kazakhstan’s Foreign Ministry has invited government and opposition officials, as well as delegates from Russia, Turkey, and Iran to Astana on Thursday and Friday. Astana has already hosted a round of talks among the main Syrian players last month.

Last week the Syrian government and rebels exchanged dozens of prisoners—including women and children who were held by insurgents for years.

In other developments Monday, authorities in the central Syrian city of Hama, unveiled a statue of late President Hafez Assad to replace the one pulled down by demonstrators nearly six years ago, in the early days of the uprising against his son’s rule.

The new statue stands on the same spot where the earlier one stood. Hafez Assad ruled Syria for 30 years before parliament passed power to his son, in 2000. He besieged Hama in response to a revolt by the Muslim Brotherhood in 1982. An estimated 10,000 – 40,000 people were killed at the time.

His son, President Bashar Assad, has battled a six-year insurgency against his rule that started as an Arab Spring uprising but quickly descended into an all-out civil war.

In southern Syria, fresh clashes between the government and rebels in the contested Deraa province killed at least 23 people, according to the Britain-based Syrian Observatory for Human Rights. The fighting punctured an otherwise prolonged period of relative calm between the two sides.