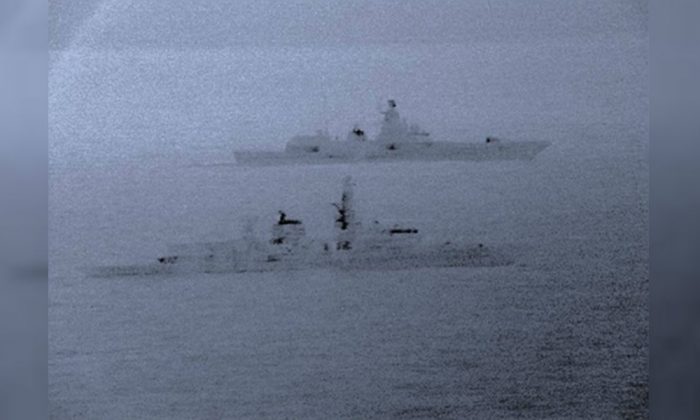 A Russian warship sailing in international waters near UK territory was given a British escort on Christmas day, the Royal Navy revealed.

According to state-backed RT, Admiral Gorshkov, Russia’s newest guided-missile frigate, is in training and is scheduled to go into service by the end of next year.

Seen through the WESCAM of an @RNASCuldrose Merlin helicopter (829 NAS) – this is @HMSStAlbans escorting a Russian warship through the North Sea on Christmas Day. Always at high readiness, the ship & embarked aviators keep Britain's waters safe all year. https://t.co/mXEJW2PV1j pic.twitter.com/3mQt362CaQ

On Christmas Eve, patrol vessel HMS Tyne was called out to monitor an intelligence-gathering Russian vessel as it traversed the North Sea and the English Channel.

The Royal Navy says it has seen an uptick in Russian vessels transiting UK waters over the holidays.

A Wildcat helicopter was also dispatched to monitor two other Russian vessels, the Royal Navy said.

UK Air Chief Marshal Sir Stuart Peach said in a speech earlier this month at the Royal United Services Institute that NATO had prioritized protecting undersea communication lines “in response to the threat posed by the modernization of the Russian navy, both nuclear and conventional submarines and ships,” reported the BBC.

“I will not hesitate in defending our waters or tolerate any form of aggression,” UK Defense Secretary Gavin Williamson said in the release, adding that “Britain will never be intimidated when it comes to protecting our country, our people, and our national interests.”