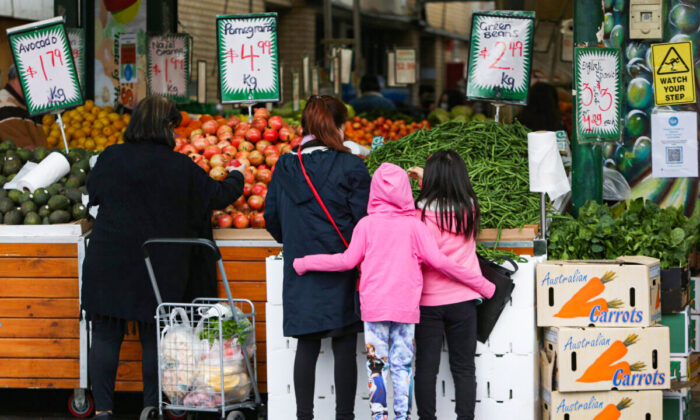 Shoppers gather to buy fruit and vegetables at a store in the suburb of Fairfield in Sydney, Australia, on July 9, 2021. (Lisa Maree Williams/Getty Images)
Australia

The world should ready itself for a possible global food crisis in the coming months amid the fallout of the Russian-Ukrainian conflict, according to a new report (pdf) from agricultural financial advisory Rabobank.

Over the past 20 years, Russia, Belarus, and Ukraine have become major suppliers in global grain and agricultural markets, producing between 20 to 30 percent of a range of primary products, including wheat, corn, barley, canola, sunflower oil, pulses, nitrogen-based fertiliser, and potash.

Rabobank noted that given the impossibility of estimating how much grain and other agricultural products Ukraine will be able to produce in the coming growing season—even with conservative modelling estimates—it was likely there would be a shortfall of grain and feed, which could pose a severe threat to global food security.

“The world has not yet fully felt the heavy absence of Ukraine’s supplies,” the report said. “However, this is about to change from July onward.”

“In years when global grain supply has fallen 40 to 50 [million] metric tonnes below trend consumption in one season, the historical trend has been that the global food price index rises to very high levels. The most recent Ukrainian crisis has pushed the FAO Food Price Index to a record high, as heavy supply losses in the world market have been expected.”

The financial advisory said they expected “elevated global grain and oilseed prices to persist throughout the year—and for years to come.”

On May 13, Indian authorities said it would ban the export of wheat, effective immediately, to shore up its own food security.

The news was met with cynicism from import-reliant countries, with Germany’s Agriculture Minister Cem Ozdemir arguing the move could exacerbate the current crisis, especially if other countries follow suit, reported Aljazeera.

“If everyone starts to impose export restrictions or to close markets, that would worsen the crisis,” he said. “We call on India to assume its responsibility as a G20 member.”

Matt Dalgleish from market analysis firm Thomas Elder Markets in Australia said that the Ukrainian-Russian conflict has definitely pushed some import-reliant countries to the point of desperation.

“Countries that are on our doorstep, like Indonesia, that have a huge population and are struggling for self-sufficiency in terms of their [own] self-sufficiency, they could have problems,” Dalgleish told The Epoch Times. “In the Middle East and North African area—like Algeria, Libya, and Egypt—they are all countries susceptible to food risk and food insecurity.”

Dalgleish said due to the lower income levels in those countries; much of the population already spends a higher proportion of income on food-related matters, and as grain supplies drop, prices could rise as countries compete for supply.

“When people become food insecure, that’s a very quick way to get civil disobedience and instability within a country,” he said.

Dalgleish noted that countries like Australia—not dependent on imported food supplies—would instead feel inflationary pressures as prices ramp up for basics like fuel and fertiliser, due to the sanctions placed on Russia. This could have a flow-on effect and cause prices to rise in staples like flour, milk, vegetables, and meat.

Fertiliser prices reached an all-time high in April 2022, according to Rabobank, after supplies from Belarus and Russia were restricted. Australian producers could be left struggling to find enough of the product to support crop growth and meat production

Further, the decision by European Union countries to stop buying Russian fuel supplies (pdf) and Russia’s decision to stop exporting fuel to countries supporting Ukraine, would exacerbate volatilities in the energy market and push up the price of shipping—another contributing factor to rising prices.

“With Europe likely to reduce Russian energy imports further with a ban on Russian oil imports by late 2022, and with Russia preparing legislation to disrupt commodity exports to countries that impose sanctions or supply Ukraine with weapons, we expect energy prices to stay volatile and high,” Rabobank said. “While oil prices above USD 100/bbl already feel expensive, a further greater than 50 percent price upside is possible as a consequence of those sanctions.”

For example, fuel prices in Australia have been rising consistently, with the average petrol price now around $2.06 a litre as of May 23, an increase of 45.6 cents from recent lows after the former Coalition government decided to cut the fuel excise tax.

Dalgleish says these pressures on the agricultural and transport sectors will cause further inflationary pain for countries like Australia and the United States, with the analyst warning that the world could head towards a period of recession similar to the 1970s.

“If you’re looking at developed economies that are really crucial for world growth, they’re seeing the impacts of these inflationary factors, and for them, it is starting to reduce their GDP and economic growth,” he said. “I think there is a risk of recession and potentially stagflation globally.”