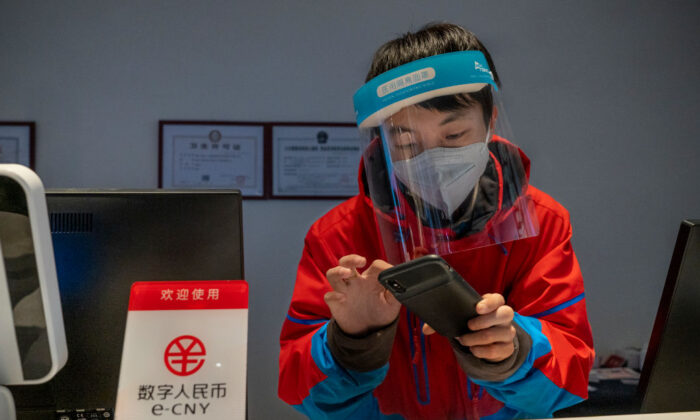 A worker at the front desk of Prince Ski Town Hotel checks the phone behind a sign saying "digital renminbi (e-CNY) is accepted" in Zhangjiakou, China, on Dec. 4, 2021. (Andrea Verdelli/Getty Images)
Thinking About China

The Russian-Ukrainian war will not only harm both countries but it will also severely damage the global economy. In particular, the Chinese Communist Party (CCP), which has close ties to Russia and Ukraine, will certainly suffer economic consequences from the conflict.

Cheng Xiaonong, an economist living in the United States, told The Epoch Times that China’s economic bubble is about to burst, and the Russian-Ukrainian war can only make it worse.

Russia has been hit with comprehensive economic sanctions from the West. In the past several weeks, the war and the sanctions have caused global stock markets to plummet. Prices for energy, commodity, grain, oil, and food have continued to soar. Global supply chains have again been affected, and inflationary pressures have also been exacerbated.

At the beginning of this year, Zhu Haibin, chief China economist at J.P. Morgan, predicted that China’s economy may grow by 4.9 percent in 2022, while Lu Ting, chief China economist at Nomura Securities, estimated that it is more appropriate to set this growth rate at about 5 percent. If the growth target is set at above 5 percent, such as around 5.5 percent, it would require a sharp rebound at the beginning of the year, he said.

Although the outbreak of the Russian-Ukrainian war exacerbated the situation, Chinese Premier Li Keqiang announced recently that China’s economic growth target for this year is around 5.5 percent. Lian Weiliang, the CCP’s deputy director of the National Development and Reform Commission, also said on March 7 that although the external environment is more complicated and severe, the fundamentals of long-term improvement remain unchanged.

In this regard, Cheng pointed out that the CCP often exaggerates its economic growth for propaganda purposes, so official figures released by Beijing are not credible, and Lian’s claim that the fundamentals of long-term “improvement” are also a cliché for the sake of maintaining stability.

“In fact, there are early signs of a recession in China, and the Russian-Ukrainian war will make it worse,” Cheng said.

Avril Haines, director of the U.S. national intelligence, stated at the House Intelligence Committee’s annual hearing on March 8 that the CCP is facing the lowest economic growth rate in the past 30 years. He believes that Chinese leader Xi Jinping must feel unsettled in what he is seeing with the sanctions and isolation imposed on Russia when the war began.

War Will Have Certain Impact on China

Cheng expects that trade between China and Ukraine will drop sharply, and the anticipated reduction of Ukrainian grain production and exports may have a certain impact on China.

China is the largest importer of corn, with about 30 percent of its imports coming from Ukraine. At the same time, Ukraine is also China’s main source of barley. Last year, 54 percent of Ukraine’s barley exports were sold to China, accounting for 28 percent of China’s barley imports.

On the other hand, Cheng noted that the CCP is highly dependent on Ukraine in terms of military supplies, especially the gas turbines provided by Ukraine are crucial to the CCP’s military aircraft and ships. Therefore, in the long run, the Ukraine crisis will have a considerable impact on the CCP in the aspect of military supplies.

With regard to Russia, Cheng expects that China will increase imports from Russia and bilateral trade between Russia and China will increase significantly. This is because Russia needs help from the CCP amid sanctions on its energy exports. On one hand, it needs to take advantage of the CCP’s financial system to handle economic expenses; and on the other hand, it needs to export more crude oil to China.

At the same time, China’s renminbi may replace the dollar as a safe-haven currency for the Russian private sector. With limited dollar reserves, the Russian government has opened up another channel by allowing banks to open renminbi accounts. But based on Cheng’s analysis, Russia’s economy is only one-tenth the size that of China, so even if the renminbi becomes popular in Russia, it won’t provide much help to China’s economy.

He believes that compared with China’s internal crisis, the impact of the Russian-Ukrainian war on China’s economy will not be too great, as Chinese companies’ debt problem is the real crisis facing the CCP.

Cheng believes that contrary to CCP officials’ claims that the fundamentals of China’s economy are characterized by long-term improvement; in reality, the fundamentals of the overall economy are akin to a bubble about to burst. The pandemic, as well as the changing international environment, are just external factors that merely play the role of fanning the flame.

“The end of the Russian-Ukraine war will not help China get away from its economic crisis,” he said. “The biggest weakness of the CCP right now is that no matter how beautiful its propaganda is—boasting how great its economy is—it has no solution to help Chinese companies repay their foreign debts because China’s foreign exchange is very tight,” Cheng added.

Cheng also pointed out that the entire Chinese economy long ago began reliant on a model based on real estate speculation to maintain bank operations, and with loans being dominated by those for real estate.

This resulted in the entire economy being supported by real estate bubbles. These are clear manifestations foreshadowing upcoming crises. Since the second half of last year, the real estate bubble has clearly burst, with Evergrande being the first to bear the brunt.

Following Evergrande, real estate developers such as Fantasia and Kaisa encountered debt crises one after another, triggering a slew of defaults.

Cheng predicts that Wall Street will face considerable challenges in the second half of this year, and a large number of Chinese companies will default on their debts. By then, the reality of China’s overall economic strength and its weaknesses will gradually be exposed.

“On the surface, the default of Chinese corporate debts does not seem to have much to do with the Chinese economy, but in fact, it will seriously shake China’s international credibility,” he stressed.

China plans to increase defense spending by 7.1 percent to 1.45 trillion yuan ($230 billion), the highest increment in the past three years, according to a draft government budget report released by the Chinese Ministry of Finance recently. In contrast, overall fiscal spending is projected to grow by only 3.9 percent year on year.

In this regard, Cheng said that the official figures released by the CCP are not very useful, because the Party’s military spending is not transparent. For example, the cost of the Chinese aircraft carriers is not included in the defense budget.

“It may appear to the outside world affected by the Russian-Ukrainian war, the CCP is increasing its defense budget, but in fact, whether the CCP wants to engage in an arms race or invade Taiwan by force, it is unlikely that the Party has the financial capability to continue to support it,” Cheng emphasized.

According to China state media Securities Times, the CCP’s central bank recently handed over 1 trillion yuan (about $160 billion) to the Ministry of Finance, as relief funds to “support companies in trouble … stabilize employment and protect people’s livelihood,” and stabilize the macroeconomic market.

“The CCP’s Central Bank has provided 1 trillion yuan to the Ministry of Finance to maintain this year’s expenses, but it cannot afford to do this every year, because it is not a commercial bank,” Cheng explained.

“Such a huge amount is the profit balance it has accumulated over the years, and it is a one-time emergency relief. To a certain extent, this indicates that the CCP’s finances are already extremely tight.”