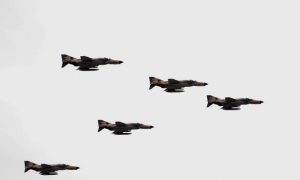 The Finnish Defense Forces has published high-resolution images of Russian planes over the Baltic Sea amid increased activity in recent months.

A few days ago, NATO announced it intercepted at least 28 Russian planes over the Baltic region. Officials said that Russia is testing NATO’s defenses and response times, and they’re not planning an attack.

“The past few days have seen unusually intense Russian air activity over the Gulf of Finland and the Baltic Sea. Air activity intensified on December 6 and has continued during the first days of the week. No violations of Finnish airspace have been observed,” said the Finnish military in a post on Dec. 12.

Finland’s military added that it has stepped up the air policing of its airspace. Finland and Norway are members of NATO, while Sweden is not.

“The Russian pilot’s behaviour was not quite normal,” Norwegian armed forces spokesman Brynjar Stordal was quoted by the AFP news agency as saying in early December.

When the Russian plane not near–within 65 feet–the Norwegian pilot shouted: “What the hell!” Stordal added: “We don’t know if it was a miscalculation or if he deliberately put himself in the path of our F-16.”

Here’s the video below:

On Tuesday the Norwegian military said one of its warplanes had a “near miss” with a Russian fighter which had ventured too close, north of Norway

The Finnish air force said that there had been “unusually intense” Russian activity over the Baltic Sea and the Gulf of Finland, with most flights involving bombers, fighters and transport planes heading between the Russian mainland and the Kaliningrad enclave, between Lithuania and Poland

Nato said on Monday the alliance’s jets intercepted Russian planes repeatedly in the Baltic, and reported more than 30 types of Russian military aircraft in the area