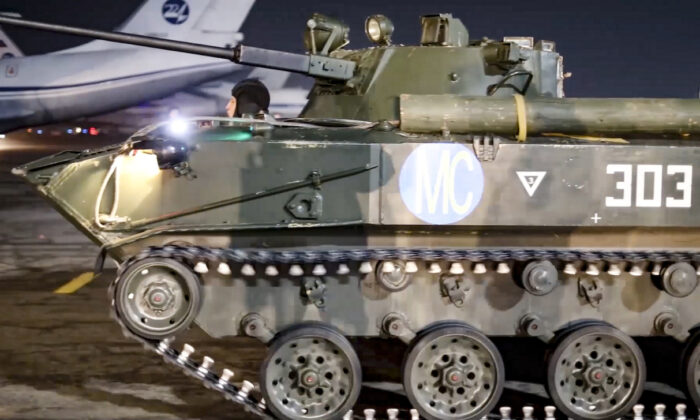 A military vehicle of Russian peacekeepers of Collective Security Treaty Organization gets ready to be loaded onto a Russian military plane starting to withdraw its troops at an airport outside Almaty, Kazakhstan, on Jan. 13, 2022. (Russian Defense Ministry Press Service via AP)
International

MOSCOW—Russia’s defense ministry says the troops that were deployed to Kazakhstan as violent demonstrations shook the country have returned home.

The troops were part of a force sent as peacekeepers by the Collective Treaty Security Organization, a Russia-led military alliance of six former Soviet states. The CSTO approved the force of more than 2,000 on Jan. 5 at the request of Kazakh President Kassym-Jomart Tokayev.

The Russian Defense Ministry said Saturday that all of its planes carrying troops had returned. It was not clear whether troops from other CSTO countries remain in Kazakhstan.

The demonstrations started on Jan. 2 to protest a sharp rise in fuel prices.

They spread quickly from the western part of the Central Asian nation to more populous areas, eventually reaching its largest city of Almaty, and grew into violence within several days.

But something changed over the course of a week—groups of armed men appeared in Almaty, with some seen riding in cars without license plates or with their faces covered. Marchers at the peaceful protests say these men began urging them to storm government buildings, promising to give them guns.

Clashes with police soon broke out, and by the night of Jan. 5, Almaty was in chaos. City Hall was burning, as were cars and buses; stores were looted; and attempts were made to storm the presidential residence. Gunshots were heard in the streets, the internet was blacked out, and even the airport was briefly seized.

Dozens of people were killed in clashes with the country’s security forces, who opened fire on Jan. 6. Alongside dozens of protesters who died, at least 12 officers also were reported killed. The next day, Tokayev announced he had given security forces shoot-to-kill orders to halt the violent unrest, saying: “We intend to act with maximum severity regarding lawbreakers.”

Tokayev has blamed the unrest on what he called “terrorists” who received foreign training and support. But nearly two weeks after the events that led to scores of deaths and about 16,000 arrests, the government has not presented any evidence to support its allegation of outside involvement.

It remains unclear whether these more violent actors were individuals taking advantage of the mayhem to loot and vandalize stores, or if they were part of organized groups with larger political motives.

Protesters, however, say their rallies were somehow undermined, leading to the crackdown by security forces. Tokayev has said authorities didn’t use force at peaceful demonstrations.

Although the protests began over the higher price of fuel, the scope and the agenda of the demonstrations expanded quickly. Large crowds rallied in major cities, venting their frustration with worsening living conditions and inequality under the authoritarian government that has maintained a tight grip on power for over three decades in the energy-rich nation of 19 million.