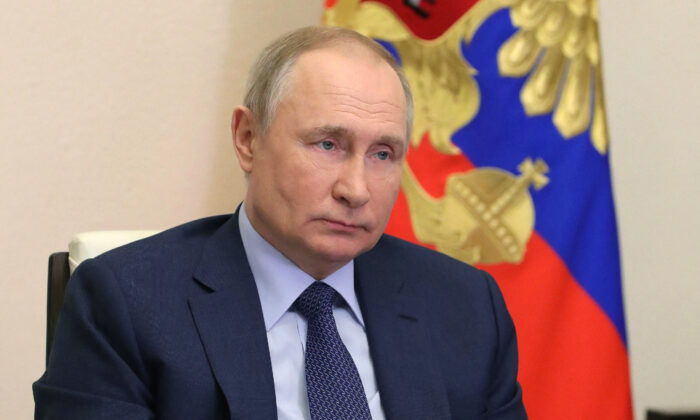 Russian President Vladimir Putin holds a meeting with winners of state culture prizes via a video link at the Novo-Ogaryovo state residence outside Moscow on March 25, 2022. (Mikhail Klimentyev/Sputnik/AFP via Getty Images)
Russia-Ukraine War

Russian Troops Around Kyiv Regrouping to Focus on Donbass: Kremlin

The Russian troops stationed near the Ukrainian capital Kyiv are being regrouped to focus on the “main goal” of the special military operation: Donbass, the Kremlin said.

“In the directions of Kyiv and Chernihiv, a planned regrouping of troops is taking place,” Russian Defence Ministry spokesperson Igor Konashenkov said during a press briefing on Wednesday.

“The purpose of regrouping or Russian armed forces is to focus on key fronts and first of all to complete [the] operation of total liberation of Donbass,” he added.

Pentagon confirmed the move of the Russian armed forces in Ukraine.

Russia has started to reposition under 20 percent of the forces arrayed around Kyiv, Pentagon spokesman John Kirby said.

The Russian troops may have moved into Belarus in preparation for redeployment instead of being sent back to their home garrisons, he said.

It indicates that the Kremlin is carrying out the previously announced redeployment plan and reinforcing forces in the Donbass area.

Russian President Vladimir Putin ordered a full-scale invasion of Ukraine on Feb. 24 which the Kremlin called “a special military operation.”

The United Nations said that as of March 29, 1,179 civilians have been killed and 1,860 injured in Ukraine since Russia’s invasion and over 4 million people have fled Ukraine.

The two sides appeared to make some progress after weeks of talks, though Moscow denied there were breakthroughs.

However, there are several hurdles that still have to be cleared before a potential ceasefire deal.

It’s unclear how many countries will opt-in for this arrangement.

The two countries are also still disputing the arrangement of Donbass and Crimea.

Ukraine proposed to set these two areas aside in the ceasefire deal, exclude them from the territory security guarantee mechanism, and try to solve the issue through further negotiations.

Lavrov’s remarks were rebutted by a spokesperson from his Ukrainian counterpart.

“Lavrov demonstrates [a] misunderstanding of the negotiation process. The issues of Crimea and Donbas will be settled for good after Ukraine restores its sovereignty over them,” Ukrainian Foreign Ministry spokesman Oleg Nikolenko wrote in a Twitter post. “During the talks in Istanbul, the Ukrainian delegation presented its proposals on how to achieve this goal.”