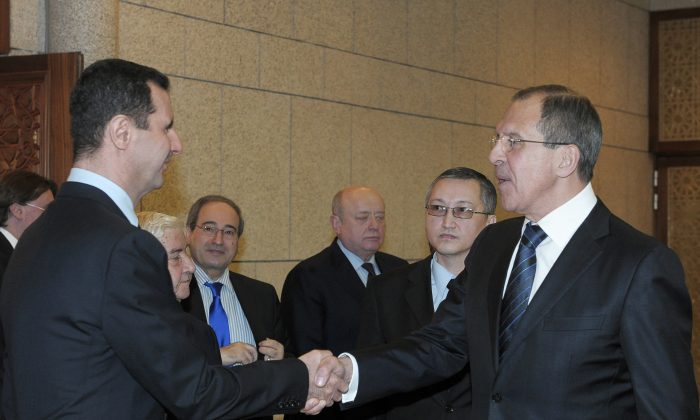 The increased Russian activity in Syria reflects Moscow’s deep concerns that its longtime ally is on the brink of collapse, as well as hopes by President Vladimir Putin that a common battle against ISIS extremists can improve Russia’s ties with the West, strained over Ukraine.

But the strategy could be risky—and unless Russia sends large numbers of troops, halting the territorial gains made by Islamic extremists could prove tough.

Israeli Defense Minister Moshe Ya’alon told reporters Thursday that the Russian buildup appears to be limited for the time being. He said military advisers, technicians, and security guards have arrived in recent days, with the main goal of setting up an air base near the coastal town of Latakia that could be used to stage strikes on the Islamic State in Iraq and Syria (ISIS).

“As far as we understand, at this stage we are talking about a limited force that includes advisers, a security team, and preparations for operating planes and combat helicopters,” Ya’alon said. He called the move “significant.”

The claim was the latest indication of a Russian military buildup in Syria that has raised U.S. and NATO concerns. The United States and its allies see Assad as the cause of the Syrian crisis, which has claimed more than 250,000 lives in over four years of fighting, and Washington has warned Moscow against beefing up its presence.

In Moscow, Russian Foreign Minister Sergei Lavrov said that Russia is airlifting weapons to Syria and that Russian servicemen are training its military how to use them. He would not provide numbers or any other specifics.

Asked about Russian planes flying to the airfield near Latakia, Lavrov said they were carrying “military items in accordance with existing contracts and humanitarian aid.” He said Russia isn’t planning “any additional steps,” but held the door open for broader action.

“If it’s necessary, we will act in full conformity with the Russian legislation, international law, and our obligations, exclusively on the request and consent of the government of Syria and other countries of the region, if there is a talk about helping them fight terrorism,” he said.

Russia has been a longtime backer of Syria, and it has supported Assad throughout the civil war by shielding him from U.N. sanctions and providing weapons. It also appears eager to send a broader message that Moscow remains loyal to its allies and strongly resents forceful change of regimes through foreign interference.

Moscow also has other key interests at stake. Russia maintains a naval base at Tartus, just 50 miles (80 kilometers) south of Latakia. Earlier this week, the nearby province of Idlib fell to al-Qaeda and other Islamic extremists.

Putin has also sought to cast arms supplies to Assad’s government as part of international efforts to combat the ISIS group and other terrorist organizations in Syria. By floating the idea of joining a U.S.-led coalition fighting ISIS terrorists, Putin may hope to improve ties with the West, ravaged in the wake of the Ukrainian crisis.

So far, Russia’s moves on Syria do not appear to be coordinated with other countries operating in the area. However, Putin has not ruled out a larger role in Syria, saying last week that he was “looking at various options.” The vague remark and the ongoing Russian buildup signal that he has decided to back up Assad.

Putin is expected to focus on the situation in Syria when he addresses the U.N. General Assembly at the end of the month, and some analysts believe that Russia wants to have its military force in Syria ready for action by the time he speaks.

Putin’s spokesman Dmitry Peskov stressed that Russia sees Syrian government forces as the only ones capable of fighting ISIS, adding that it is Russia’s mission to support them.

Lavrov, who in the past days twice spoke with U.S. Secretary of State John Kerry about Washington’s concerns, bristled at the U.S. warnings and criticized America for failing to include Syria in the anti-ISIS coalition.

“It’s a colossal mistake that the coalition created by the United States envisaged no cooperation with the Syrian government,” he said.

But at this stage, it is unclear whether Russian involvement could turn the tide on the battlefield. Since the war erupted in early 2011, Assad’s forces have suffered repeated losses. Two out of Syria’s 14 provinces are totally out of government control. Idlib fell Wednesday, while Raqqa was seized in 2014 by the ISIS group.

In terms of numbers, the Russian military today is a far cry from the Soviet army, and it is not capable of deploying a massive force to engage in ground action. Observers expect the Kremlin at the most to send a few warplanes along with support personnel and guards to carry out some symbolic airstrikes in a show of Russian determination to fight ISIS.

As ISIS has gained strength in the region, the United States has softened its earlier calls for Assad’s ouster, setting the stage for possible cooperation with Russia. ISIS, known for its gruesome videos of killing and torturing enemies and non-Muslims, now controls one-third of both Syria and Iraq, and has declared a self-styled caliphate on the territory it controls, imposing a harsh interpretation of Islamic law, or Sharia.

Ya’alon’s information closely resembled that of U.S. defense officials who said Washington has seen the Russians fly a variety of military assets into the airfield south of Latakia, including troops capable of protecting Russian forces there and modular housing units.

Moshe Ma’oz, a Syria expert at the Hebrew University in Jerusalem, says the Russian move was part of a broader strategy to ensure Assad’s survival.

“This is the secret to (Assad’s) strength: Iran, Russia, and Hezbollah,” Ma’oz said.