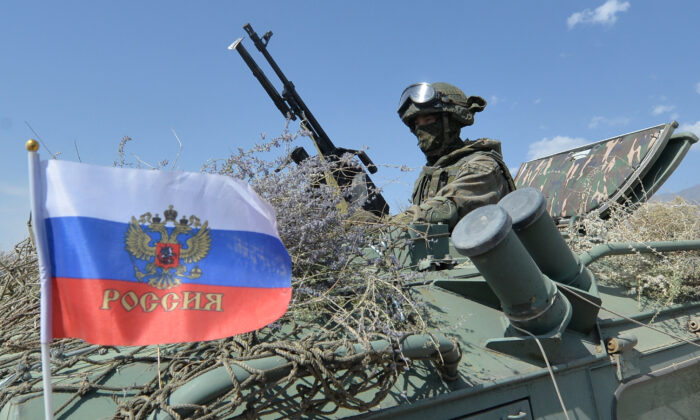 In recent days, Western powers have been warning about and making diplomatic moves related to what they say is a concerning buildup of Russian troops near Ukraine. But a Canadian defence expert says although the situation is unpredictable, the risk of an invasion by Russia is slim.

Youri Cormier, executive director of the Conference of Defence Associations and an adjunct professor at the Royal Military College of Canada, told The Epoch Times that showcasing power is “part of a larger game that the Russians play,” which is also intended for a domestic audience.

“Putin always plays his cards to a domestic audience,” he says of the Russian president.

“But whether or not he’s willing to act upon it or just showcase that power? Well, we know he’s capable of it because he did it a few years back in 2014, so there’s always that risk that something will come out of it,” Cormier said, referring to the Russian invasion and subsequent annexation of Ukraine’s Crimean Peninsula.

The Ukrainian Defence Ministry said in early November that Russia had left military units near the Ukrainian border after holding a series of large-scale military drills. On Nov. 13, President Volodymyr Zelenskiy said the number of Russian troops in the region now totals 100,000. Russia also amassed troops in the Black Sea region of Crimea earlier this year.

A paper recently published by the Carnegie Endowment for International Peace suggests Russia could eventually try to capture a strip of land to connect Crimea to mainland Russia, as its current road access is only via a bridge.

The paper also warns about Putin wanting to take over Ukraine as a means to bolster his legacy. Cormier, however, doesn’t believe Russia has the intention to conquer all of Ukraine, as it is more interested in creating a sphere of influence and imposing its will rather than trying to break up countries.

“I don’t think it’s realistic to say that they could pull off something similar to what they pulled off in 2014,” he says. “The game has changed a lot since 2014. … There wasn’t the same kind of forward presence of Western troops in the area.”

He adds that Putin himself “might not know what exactly he’s trying to do here. He tends to play tough and then take opportunities when they arrive.”

The United States has warned its European allies about the troop buildup, and some Republican House representatives have written to U.S. President Joe Biden calling on him to send additional support to Ukraine.

The letter asks Biden to “take immediate and swift action to provide support to Ukraine in the form of intelligence and weapons. We also urge your administration to deploy a U.S. military presence in the Black Sea to deter a Russian invasion.”

NATO Secretary General Jens Stoltenberg also sounded the alarm on Nov. 15, but stopped short of speculating as to what could be Moscow’s intentions.

“I cannot go into details about our intelligence,” Stoltenberg said during a press conference with Ukrainian Foreign Minister Dmytro Kuleba. “We know that Russia has been willing to use these types of military capabilities before to conduct aggressive actions against Ukraine.”

Kuleba said it is “premature” to determine what is going on, but said Russia could seek to “destabilize Ukraine from the inside” or use the buildup “as a background argument for destabilizing efforts undertaken by Russia domestically.”

Some of the intelligence probably informing the United States and NATO was revealed at the beginning of November when Politico published satellite imagery showing a large amount of military vehicles stationed in a camp in the Russian town of Yelnya, closer to Belarus than Ukraine. Politico said the formation included elements of the elite 1st Guards Tank Army.

Politico and Bloomberg have quoted defence intelligence firm Janes as saying there was movement of equipment in other areas. Politico said equipment from Russia’s 4th Tank Division was being moved to areas around Bryansk and Kursk, which border Ukraine.

According to Bloomberg, at least a battalion of tanks appeared to be headed to the Pogonovo training ground via rail, located in the Voronezh region bordering Ukraine, based on social media footage from Nov. 7.

Janes wrote on Nov. 5 that monitoring by its analysts using social media indicated that “Russia is conducting force movements to staging areas closer to the border with Ukraine.” The Epoch Times has seen social media posts of alleged equipment movements but didn’t authenticate them.

Janes said that while an escalation in the Ukrainian conflict was not immediately apparent, “the movements do appear to be outside of regular cycles for Russian Ground Troops.”

Canadian security firm GardaWorld wrote in a Nov. 15 analysis about troop movements that “there is unlikely to be any military escalation in the immediate term.”

In response to U.S. and NATO comments, Kremlin spokesman Dmitry Peskov downplayed the significance of troop movements, according to state media Russia Today, without apparently addressing a potential buildup near Ukraine.

“We have repeatedly said that the movement of our armed forces on our own territory should be of no concern to anyone. Russia poses no threat to anyone,” he said.

Foreign Affairs Minister Mélanie Joly said in a tweet on Nov. 15 that “Canada is deeply concerned by the recent movement of Russian military near Ukraine’s border.”

“We call on Russia to reduce tensions and to provide transparency in its military activities,” she wrote.

An Epoch Times request for comment from the office of Deputy Prime Minister Chrystia Freeland did not receive a reply, but according to a Ukraine government statement, Freeland spoke recently with the Head of the Office of the President of Ukraine Andriy Yermak.

The statement says Yermak informed Freeland about the security situation in eastern Ukraine but did not give any details about their conversation. Yermak also expressed his appreciation “for the consolidated support of the world community and Canada.”

Meanwhile, French President Emmanuel Macron spoke directly to Putin on Nov. 15, expressing his “deep worry” about the developments in Ukraine, according to an official statement. Macron reportedly also told Putin that France is ready to defend Ukraine’s territorial integrity.

UK Defence Secretary Ben Wallace was in Ukraine on Nov. 16 to meet with President Zelenskiy, as well as his counterpart Oleksii Reznikov.

Cormier says Western support for Ukraine is having an impact.

“The credible deterrent that Russia is up against right now is when France and the UK and Canada and all these NATO countries reaffirm their support for Ukraine’s integrity and territorial integrity,” he says.

“It could very well be why Russia is building up forces but not actually acting upon it. They realize that it would be a very dangerous move.”