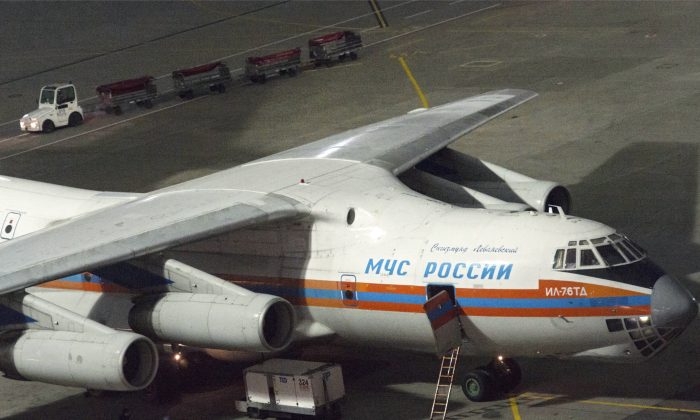 UK warns of airport security overhaul
By The Associated Press

MOSCOW—The latest on the crash of a Russian plane in Egypt that killed all 224 people onboard (all times local).

Dozens of airliners are bringing Russian tourists back home from Egypt, carrying only cabin baggage, while Russian cargo planes were hauling back the rest of their luggage.

At least 26 flights from the Egyptian resort areas of Sharm el-Sheikh and Hurghada had landed at Moscow’s three airports as of Sunday evening. There was no overall figure for how many tourists had been brought home since the Friday announcement that Russia was suspending new passenger flights to Egypt because of security concerns.

The Emergencies Ministry said 55 flights were planned between late Saturday and late Sunday. It said the flights would leave from 13 different airports, implying the return trips would go to the originating point.

Lumbering airlifter planes such as Il-76s are bringing back heavier luggage. The planes belong to the emergencies and defense ministries and to a private cargo airline.

Britain’s foreign secretary says airport security in many cities will need to be overhauled if it is confirmed the Russian plane crash in the Sinai was caused by a bomb planted by the Islamic State group or someone inspired by the militants.

Foreign Secretary Philip Hammond warned that if those suspicions are true, there needs to be a rethink of security at airports in areas where the extremist group is active.

U.S. and British officials suspect the Oct. 31 flight from Sharm el-Sheikh to St. Petersburg was brought down by a bomb on board, but Egypt warns it is too early to say what caused the crash.

Mourners have packed into the landmark St. Isaac’s Cathedral in St. Petersburg for a memorial service for victims of the Russian plane crash.

As a choir sang, the bell of the world’s fourth-largest cathedral was tolling one time for each of the 224 victims. Most of the victims were from St. Petersburg or other areas of northwest Russia.

The Russian airliner crashed Oct. 31, about 20 minutes after taking off from an Egyptian resort area. The British government and U.S. officials have said intelligence suggests the plane was downed by a bomb, but Egypt says there’s still no confirmation of what caused the crash.

Egyptian authorities are preventing camera crews from foreign media from filming inside the Sharm el-Sheikh airport, along the city’s main tourist strip in Naama Bay, or other public areas.

Lines for departure were normal on Sunday, with most flights scheduled for the afternoon and evening, including those for Britain and Russia. Egyptian state and private channels, allowed to film inside the airport, highlighted security checks and luggage scanning at the main queue for international departures.

The Mideast’s biggest airline says it is reviewing security procedures in Egypt but remains committed to flying there as suspicions grow that a bomb brought down a Russian airliner in the Sinai Peninsula.

Emirates airline President Tim Clark told reporters Sunday at the start of the Dubai Airshow that Egypt is “an enormously important market” to the carrier and that it is important that it maintains its operations there.

He says Dubai-based Emirates is reviewing its procedures relating to security, ground handling and access to aircraft while they are on the ground in Egypt.

Emirates operates two daily roundtrip flights linking Cairo with Dubai, the Middle East’s commercial hub. It does not fly to Sharm el-Sheikh, the departure airport for the doomed Russian airliner.

A deputy Russian prime minister says the first of three teams of Russian inspectors has been dispatched to Egypt to examine security conditions at airports there.

A Russian airliner crashed Oct. 31, killing all 224 people aboard, about 20 minutes after taking off from an Egyptian resort area. The British government and U.S. officials have said intelligence suggests the plane was downed by a bomb, but Egypt says there’s still no confirmation of what caused the crash.

Dvorkovich did not give details of specific issues on which the inspectors might focus.

He said that 11,000 Russians were flown home from Egypt on Saturday and an even larger number were expected to leave Sunday, according to Russian news agencies.

Russians flying out of Egypt are allowed to take only cabin baggage. The Ministry of Defense said Sunday that it has sent two Il-76 cargo planes to Egypt to bring back larger luggage the Russians had to leave behind.