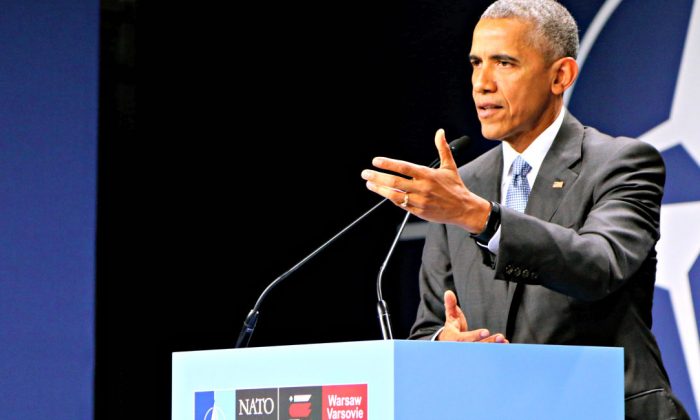 WARSAW, Poland—Russian aggression, radical Islamist terrorism, the refugee crisis, Brexit, Afghanistan. The list of challenges NATO leaders faced at the biennial summit here over the weekend was diverse, highlighting what some consider to be a post-Cold War moment of truth for the alliance to prove it still matters.

Speaking to reporters Saturday, President Barack Obama addressed what he called a “pivotal moment” for NATO.

“In the 70 years of NATO, we have perhaps never faced so many challenges at once,” Obama said. “We’re moving forward with the most significant reinforcement of our common defense at any time since the Cold War.”

We’re moving forward with the most significant reinforcement of our common defense at any time since the Cold War.
— President Barack Obama

The alliance must reassure eastern members who are wary of Russian aggression while not antagonizing Russia into a back and forth of military one-upmanship. Meanwhile, many NATO states, particularly those in Western Europe, are feeling the domestic political pinch of the combined threat of radical Islamist terrorism and a wave of refugees from war-torn Middle Eastern states.

This all comes as Europe deals with post-Brexit fallout and the rise of nationalist sentiment across the Continent, which collectively eats away at popular support for multinational institutions such as NATO, founded as the North Atlantic Treaty Organization.

“The Warsaw Summit comes at a defining moment in the history of our alliance,” NATO Secretary General Jens Stoltenberg said Friday, July 8. “With unpredictable threats and complex challenges from many directions, NATO has responded. We have launched a wholesale reinforcement of our collective defense and deterrence. The biggest since the end of the Cold War.”

The two-day NATO summit was held at Warsaw’s national stadium. Delegates and journalists from around the world filled the hallways, rubbing shoulders with world leaders and military officials. Journalists jockeyed for position at press conferences, afterward scrambling to the sprawling media center to file dispatches.

The stadium was under security lockdown, and one could constantly hear the sounds of police sirens as the motorcades of world leaders arrived and departed.

The city was also on high alert. Warsaw’s streets were unusually quiet, long stretches sealed off for security reasons. Soldiers patrolled with weapons drawn. Friday, the sky roared with the sound of jet noise as NATO warplanes performed fly-bys for visiting leaders.

Obama’s Saturday evening press conference drew by far the biggest audience. The summit’s largest press briefing venue was filled to capacity, with journalists standing huddled along the walls, craning their necks for a better view of the U.S. president while under the watchful eyes of the Secret Service.

Like a conductor before an orchestra, a cacophony of clicking camera shutters matched Obama’s every hand gesture as photojournalists hunted for the perfect shot.

Obama commented on the Dallas shootings before he segued into the importance of NATO and the legacy of America’s commitment to defend Europe.

“Generations of Americans have served here for our common security,” Obama said. “In good times and in bad, Europe can count on the United States.”

“I believe the process of globalization is here to stay. It’s happening. It’s here,” Obama said.

“NATO is an example of a really enduring multilateral organization that helped us get through some really challenging times.  There are fewer wars between states than ever before, and almost no wars between great powers. And that’s a great legacy of leadership in the U.S. and Europe and Asia after the end of World War II that built this international architecture that worked.”

Since 2014, the Islamic State (ISIS) terrorist group has attacked six NATO countries—the United States, Canada, Denmark, France, Belgium, and Turkey. And terrorist plots have been thwarted in other NATO countries, including Germany and the United Kingdom.

Yet, despite the mounting threat, summit talks in Warsaw largely focused on responding to Russian aggression in Ukraine and the Russian threat to NATO’s eastern members.

“For sure Russia is a bigger threat,” Luke Coffey, director of The Heritage Foundation’s foreign policy center, told The Daily Signal:

“ISIS is a terror threat and does not pose an existential threat to any NATO member. Whereas Russia invading Estonia could mean the end of the country—literally.”

There has been, however, some breaking of ranks within NATO over Russia.

For France, Russia is not an adversary, not a threat.
— French President François Hollande

On Friday, French President François Hollande said: “NATO has no role at all to be saying what Europe’s relations with Russia should be. For France, Russia is not an adversary, not a threat.”

“Russia is a partner which, it is true, may sometimes, and we have seen that in Ukraine, use force, which we have condemned when it annexed Crimea.”

“The multinational spearhead force that we agreed to at the Wales summit [in September 2014] is now operational,” Cameron told reporters Saturday. “It’s capable of deploying anywhere on alliance territory in just a few days. So it sends a strong, clear message to Russia that NATO stands ready to respond quickly to threats.”

Also calling out Russia, Obama said “there will be no business with Russia as usual” until the Kremlin fulfills its part of the Minsk II cease-fire accords in Ukraine.

The EU, NATO, and the United Nations all have condemned Russia’s 2014 takeover of Ukraine’s Crimean peninsula as illegal.

NATO also continues to condemn the ongoing flow of Russian troops and military hardware into eastern Ukraine to support separatist forces. This movement is a violation of the Minsk II cease-fire agreement, for which the EU maintains punitive economic sanctions against Moscow.

Russia’s actions in Ukraine, along with a pattern of aggressive fly-bys by Russian warplanes in the Baltic Sea region, have left NATO’s eastern flank rattled.

One of the summit’s key news items was the announcement that NATO will deploy four combat battalions to Poland, Estonia, Latvia, and Lithuania on a rotational basis beginning next year. The battalions will be fielded by Canada, Germany, the United Kingdom, and the United States.

This supplements a previously announced U.S. plan to deploy about 3,500 additional troops to Eastern Europe on a rotational basis.

Stoltenberg, the NATO secretary general, said the alliance’s troop deployments will send a message that “an attack against one ally will be met by forces from across the alliance.”

“NATO is as strong, as nimble, and as ready as ever,” Obama said Saturday.”NATO is sending a clear message that we will defend every ally.”

The Kremlin pushed back against NATO’s planned troop deployment, calling the perceived threat from Russia “absurd.”

“An absurd situation would be if we forgot about the military actions against Georgia, and Ukraine in Crimea and Donbas, about Russia’s military engagement in Syria, and about the incidents and provocations by Russian aircraft over the Baltic Sea.”

The main driver of NATO’s eastward pivot, and some say the alliance’s renewed post-Cold War purpose, has been Russia’s aggression in Ukraine.

NATO’s 2014 summit in Wales came on the heels of Ukraine’s Maidan revolution and Russia’s annexation of the Crimean peninsula. Two years later, Crimea is still in Russian hands and Russia still supports separatist conflict in eastern Ukraine in which people die on an almost daily basis.

“Two years on from Russia’s illegal actions in Ukraine, our message to Russia has not changed,” Cameron said Saturday. “Such action is indefensible and wrong. And we will always stand up for the sovereign right of countries to make their own decisions.”

Russia’s actions have eroded the longtime assumption among European powers that the kind of state-on-state conflicts that ravaged Europe in the first half of the 20th century could never happen again.

Reflecting this new reality is a push by some NATO leaders to increase military spending across the alliance.

Out of 28 member countries, only five—the United States, the United Kingdom, Estonia, Greece, and Poland—currently spend 2 percent or more of their gross domestic product on defense, an obligation agreed to during the summit in Wales.

On Saturday, Obama pushed alliance members that are not hitting the 2 percent mark to beef up their defense budgets, saying:

“After many years NATO has stopped the collective decline in defense spending. Over the past two years, most NATO members have halted cuts and begun investing more in defense. And this means defense spending across the alliance is now scheduled to increase.”

Ukraine is not a NATO member state, but a partner country to the alliance. NATO members therefore are not obligated to defend Ukraine militarily.

Yet, NATO has taken other steps to support Ukraine.

The package also tags funds to help Ukraine counter the threat of improvised explosive devices on the battlefield, bolster its cybersecurity, and rehabilitate wounded soldiers.

The Ukrainian president pointed to the historical significance of NATO’s holding its biennial summit in Warsaw 61 years after creation of the Warsaw Pact, the collective defense treaty the USSR and Soviet satellite states signed in the Polish capital in 1955.

“It is our common responsibility to change Russia’s aggressive behavior,” Poroshenko said. “We are grateful that NATO stands by Ukraine.”

Stoltenberg said Russia must stop its “political, military, and financial support for separatists” in eastern Ukraine.

Stoltenberg made clear, however, that the question of Ukraine joining NATO as a full member was “not currently on the table,” and the alliance would address the issue of membership at a later stage.