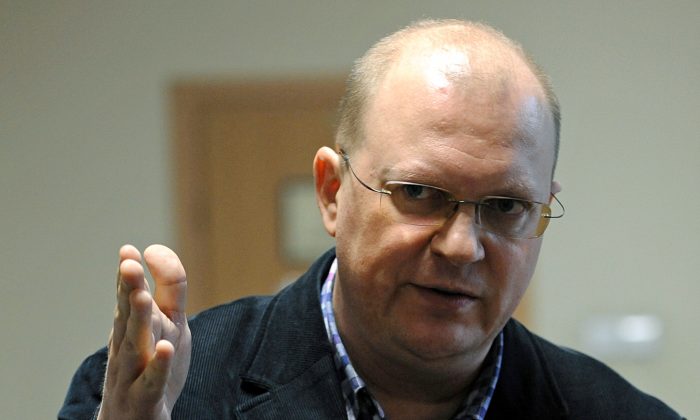 Russian journalist Leonid Sviridov speaks to the press after a three-hour meeting with officials concerning an attempt by Polish authorities to expel him from the country, in Warsaw, Poland, Wednesday, Nov. 26, 2014. Sviridov was stripped of his right to work as a journalist in Poland last month by the Foreign Ministry after Poland detained a top Polish Army official and a Polish-Russian lawyer on suspicion of spying. (AP Photo/Alik Keplicz)
Europe

WARSAW, Poland—A Russian journalist suspected of spying in Poland said Wednesday that he is fighting an attempt by Polish authorities to deport him.

Leonid Sviridov, a journalist for Russian state news agency Rossiya Segodnya, demanded to know details of the allegations against him, which authorities have so far kept secret.

Sviridov was stripped of his right to work as a journalist in Poland last month by the Foreign Ministry less than two weeks after Poland detained a top Polish army official and a Polish-Russian lawyer on suspicion of spying for Moscow.

Sviridov said he believes the case against him is political and related to those developments. He also said Polish authorities have refused to tell him specifically what evidence they have against him.

He said he had no involvement with the two espionage suspects, both of whom are under arrest as authorities investigate them.

“I don’t know them and I had never heard about them before,” Sviridov, 48, told reporters after a three-hour meeting with officials in Warsaw concerning his case. He said he was trying to convince authorities to let him stay in Poland, where he said he has lived for 17 years.

He said he expects a decision by early next year.

“This situation for me is tragic,” he said. “I don’t have anywhere to go and I will be starting over from zero.”

The Russian Foreign Ministry has denounced the Polish moves as “defiant” and “totally unmotivated,” and warned of a possible retaliation.

Sviridov was also reportedly denied the right to work in the Czech Republic in 2006 on allegations of espionage.

His case comes amid intensified efforts by Moscow to penetrate NATO counties and a new determination by the West to fight back.

Earlier this month Russia and Poland also carried out tit-for-tat expulsions of several diplomats from each country.